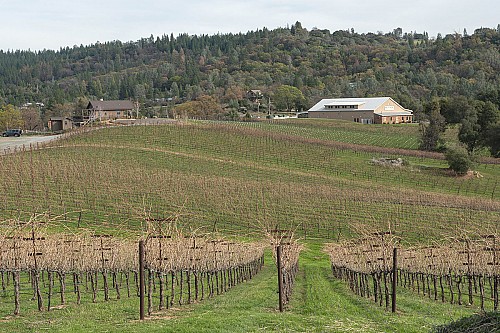 If I had a dollar for every time someone said this is what Napa was like 25 years ago, I`d be a millionaire." Jody Franklin, tourism director at El Dorado County`s chamber of commerce, chuckles as another bottle is uncorked for the small group of wine tasters. We are at Saluti Cellars, Randy and Tina Rossi`s vineyard in a lush canyon in the heart of El Dorado wine country. He was in US government counter-intelligence and spent five years "sleeping on rocks in Iraq"; she was a police officer working in the organised crime department in Sacramento. Now they make wine - about 1,500 cases a year - organise weddings and run a tiny B&B. "The idea was that we would downsize our lives," says Tina, "and all we`re doing is growing and growing." Randy just laughs and says he wants to build a pizza oven next.

Their wines are very good, not least because integral to the winemaking process is their consultant, a bright young University of California viticulture graduate named Jonathan Pack, whose family owns a similarly beautiful patch of El Dorado just down the road. His parents, Gordon and Chris, are from the UK and they, too, saw a winemaking retirement haven here but haven`t stopped working since they opened Gwinllan (Welsh for vineyard, a reference to her family roots) 10 years ago. They are also small producers - 1,300 cases a year, most of which goes to their wine club members and travellers who come to their tasting room.

In these times of mass travel, it is rare to find a genuinely under-discovered enclave, somewhere where they are just beginning to stick their toes in tourism and are thus sweetly hospitable and generously welcoming. This is such a place. El Dorado, like the neighbouring county of Amador, lies between Sacramento and the Sierra Nevada mountains - you could broadly call it the Sacramento Valley, although the winemakers demur at this broad appellation. And it is accurate, if a trifle cliched, to say that wine tourism here is what Napa Valley was a quarter of a century ago, before the film Sideways (2004) turned the trickle of Napa`s tourists into an avalanche, before the price of vineyards hit a million dollars an acre, before their Cabernets went past $100 a bottle.

What makes Sacramento particularly intriguing for oenophile tourists today is that you feel you`re discovering a work in progress. The wines here are nowhere near as well-known as those from Napa or its coastal cousin Sonoma, nor are they anywhere near as expensive. The locals appear pleasantly surprised that anyone from Europe would be interested in their part of California. When you travel the wine routes here you end up talking to the winemaker and the owner (often the same person), and you are charged a minimal, refundable tasting fee. In the well-oiled wineries of Napa, by contrast, you might pay up to $70 for a tasting session with the marketing manager.

The Sacramento wine lands are located north-east of San Francisco, around the Central Valley. What the locals say about this part of California is that it lies between the coastal fog line of San Francisco`s Bay Area and mountainous snow line that forms the border between California and Nevada. In other words, it is ideal grape-growing country that has for decades almost surreptitiously provided Napa and Sonoma winemakers with some of their grapes.

I started my journey in Sacramento, the state capital, a lovely city of half a million inhabitants that is a fast-developing foodie centre and a self-confessed beer town - they now have more than 50 craft breweries in and around the city and hold a 10-day beer festival at the end of February. Not surprisingly, the city is populated by government officials and their ranks of attendant administrators, but being within reasonable proximity of San Francisco and Silicon Valley, it is becoming increasingly attractive to tech companies. Intel, Hewlett-Packard, Apple and Oracle have set up here, their Levi`s-and-trainers-wearing staff easy to spot alongside the starched collars of the government folk. At a beer festival I attended at The Shack, a ramshackle bar and beer garden, the celebrants were predominantly millennials and the only people of advanced age were the featured band, Home By Dark, who probably should have been.

The city grew up in the wake of the California gold rush, which at the time ignited the greatest human migration in history, luring Europeans, Chinese, Latin Americans and Australians to the gold fields some 50 miles north-east of the old city. Between 1848 and the late 1860s, Sacramento became a major distribution point, a commercial and agricultural centre and a terminus for wagon trains, stagecoaches, riverboats, the Pony Express and, most importantly, the First Transcontinental Railroad, the iron horse that linked the American West to the east coast. Today, Old Sacramento stands alongside the modern city and, although it is somewhat cheapened by the type of merchandise that attracts 21st-century tourists - T-shirts with silly slogans, sweets and chocolates - there is enough authenticity to make it worth a visit. The California State Railroad Museum in the heart of the town is outstanding and is the most visited railroad museum in the country.

The modern city looks back at its Wild West roots with a mixture of pride and amusement, and has embraced 21st-century lifestyle and culture with enthusiasm. According to a study conducted by Harvard University for Time magazine, it is America`s most racially integrated city and, with its self-proclaimed status as "America`s farm-to-fork capital", it offers the epitome of the modern, idyllic Californian city lifestyle. The other area of dramatic growth is in winemaking. Professor David Block, head of the department of viticulture at the University of California, Davis, which is 15 miles outside the city centre, says that when he first arrived in 1996 there were around 800 wineries in California. "There are now more than 4,000," he told me, "many of them smaller wineries, and many of them outside Sacramento, in Amador, El Dorado and around Lodi. They`re experimenting out there, still matching grapes with climate, which is why it`s a really good time to visit."

The drive out of the city along Interstate 50 to the winelands takes you through unprepossessing enough countryside until you come to the soft, undulating hills covered with vines just outside the small town of Plymouth. The town calls itself the "gateway to the Shenandoah Valley wine country" and has just under 1,000 residents. During the gold rush days it was called Pokerville. What is surprising about such a small town is that it not only boasts a boutique hotel, called Rest, but also a thriving gourmet restaurant, Taste, recently rated by the influential Zagat guide as the best restaurant in the Sacramento region. Clearly when the tourism boom arrives, Plymouth will be ready.

What distinguishes the Amador wine country surrounding Plymouth from the neighbouring El Dorado region is altitude. Here the vineyards are 1,000ft above sea level and endure burning hot summer days, arguably making it more suitable for Rhone-style wines, a point driven home at the entrance to the Terre Rouge Wine Estate, whose sign reads: "Where the Rhone Valley meets the Sierra Nevada."

And although many regard this as a new wine region, particularly when compared with Napa, many of the Zinfandel vines that still produce terrific wines were planted around the time of the gold rush. It was prohibition in the 1920s that did for the region`s winemakers. According to Mark McKenna, winemaker at Andis Winery and one of the region`s rising stars, "prohibition was brutal for this area, we didn`t recover from it and the industry was dormant for 80 years. Mine is the first generation of professional winemakers here in a century." Andis is now producing 7,000 cases of wine a year, including outstanding small production Barbera and Grenache, and 80 per cent is sold directly from the tasting room.

Slightly further east, closer to the snow-capped Sierra Nevada mountains, El Dorado county lies between 2,500 and 3,000ft above sea level, which is why they call the area "the foothills". Here vineyards such as Saluti, Gwinllan, and the oldest and one of the largest in the area, the Boeger winery, produce fine wines and entertain travellers in their tasting rooms. Half an hour`s drive from Plymouth, the main town, Placerville (pronounced Plasserville), was at the epicentre of the gold rush in the middle of the 19th century and is now designated a California Historical Landmark. Back then it was called Old Dry Diggings and Hangtown, but it pretty soon adopted the more amicable sobriquet Placerville. A feel of the Old West remains in Placerville`s main street to this day and, strange to say, Placerville Hardware, "the oldest hardware store west of the Mississippi," is well worth a visit.

Having spent several days dining on farm-to-fork cuisine and sipping on grape-to-bottle boutique wines, it seemed appropriate to investigate the springboard for all this, the reason for these rural Sacramentans living out here in the first place. So I arranged to meet Charlie Basham just outside the Placerville city limits at the Gold Bug Park and Mine. Charlie is another retiree who has found an edifying afterlife in the foothills of the Sierras. A cheerful, ruddy-faced man, he is president of the Gold Bug Park Development Committee, responsible for maintaining and improving this historic mining area where during the peak gold rush years, up to 250 mines and claims were in operation. The two mines open to visitors today are the Bug Mine and the Priest Mine, both fascinating testaments to the industriousness of these 19th-century settlers, most of whom failed to get rich during the gold rush. According to Charlie, "the guys who really did get rich were the people who supplied equipment to the miners. Like the guy who supplied them with their wheelbarrows. He made a fortune and then, at the turn of the century, started making automobiles and made a bigger fortune. He was John Studebaker.

"And then the guy who noticed that because the miners kept the gold in their pockets they were constantly being ripped. He created trousers with rivets. He was Levi Strauss."

I prepare to drive out of Placerville and head back to Sacramento. I have been here a week and, although the vineyards were the initial draw, I have found the stories, the people and the history of the whole area irresistible. No doubt as the years pass, and more tourists discover them, some of Amador and El Dorado`s unspoilt charm will be rubbed away. But for the moment, on a sunny day with a glass of local Zinfandel in hand, looking out across the Sierra Nevada mountains, it will do nicely.