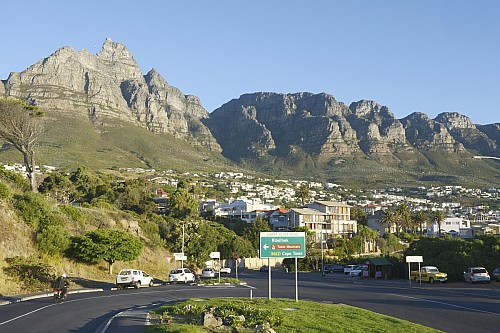 As you fly into Cape Town, circling the Atlantic seaboard-a ribbon of pristine white beaches above which lies the most expensive stretch of real estate in Africa-you pass over one of the continent's most spectacular mountain ranges, which frames both the city and the beautiful cape winelands. Then the plane dips for landing and you become increasingly aware of mile after mile of ramshackle shanty homes, sprawling as far as the eye can see.

So, in a single snapshot from your aircraft window, you are getting an Instagram picture of 21st-century South Africa, a land of feast and famine, of spectacular wealth and beauty, and of grinding poverty, crime, and corruption. What you're seeing from the aircraft is the visible disparity. Under the surface, it is far, far worse.

What has most damaged the country and widened that disparity is a decade of institutionalized corruption. Between 2009 and 2018, the entire country was hijacked by a criminal kleptocracy led by then president Jacob Zuma. In that time, this once prosperous, dynamic economic engine room of sub-Saharan Africa was reduced to a stuttering almost-failed state that could no longer fulfill the idealistic dreams of Nelson Mandela's Rainbow Nation.

A criminal kleptocracy led by then president Jacob Zuma.

When Mandela became president, in 1994, the world opened its arms to a country of reconciliation and great promise, coming as it did after 46 years of isolationist, white, Afrikaner apartheid rule. Today, some 72 percent of the country's land is still owned by the minority white South Africans, and what has emerged after the Zuma years is the antithesis of Mandela's vision, a distinctly unstable, violent society and a broken economy where most of the once functioning public utilities-ESKOM, the national power provider; PRASA, the public transport system; SAA, the national airline; and many more-have been raped and plundered by the former president and his associates.

Zuma is currently facing 16 charges covering 784 separate transactions, including one charge of racketeering, one count of money laundering, two counts of corruption, and 12 counts of fraud, and he's looking at a potential 25 years in prison. It makes Donald Trump's impeachment charges seem like municipal-regulation violations.

The consequences of what became institutionalized corruption are profound. The national power supply is now constantly interrupted in what is euphemistically called “load-shedding.” Urban neighborhoods have their electricity switched off for hours on end, emptying restaurants and turning factories, business centers, and shops into dead zones, dark and powerless places that are having the economic lifeblood sucked out of them.

The story of ESKOM (Electricity Supply Commission) is the story of South Africa's economic bankruptcy in a single company. It used to be one of the best power utilities in the world. Little more than a decade ago it employed just 17,500 people, its credit rating was so strong that it was able to borrow money at a cheaper rate than the government, and it easily powered the country with capacity to spare. Last year, the company employed 47,500 people; it is indebted to the tune of $31 billion; it cannot power the country; and it is on the verge of collapse. It has also turned many Zuma cronies into millionaires.

Dead zones, dark and powerless places that are having the economic lifeblood sucked out of them.

PRASA (Passenger Rail Agency of South Africa), the publicly owned passenger-rail company, spent hundreds of millions on 70 locomotives from Spain, only to discover on delivery that they were the wrong size for the country's rail network. In December, PRASA went into bankruptcy. The country's current president-Zuma's successor, Cyril Ramaphosa-has admitted publicly that corruption and the systematic looting of public companies such as ESKOM and PRASA during the Zuma years have cost the country at least $34 billion. In truth, it's likely to be a great deal more.

Peter Bruce, a highly regarded political columnist and former South African newspaper editor, is unequivocal about who is to blame. “The ruling A.N.C. party is a fuckup,” he says. “Tragically, it is apartheid's gift to South Africa.”

In a surreal counterpoint to Bruce's trenchant remarks about the government, as I finished writing this article the new U.S. ambassador to South Africa had just presented her credentials to the country's president. She is Lana Marks, a Palm Beach-based luxury-handbag entrepreneur, and her first formal proclamation was to heap praise on South Africa as a “vibrant democracy.” There is now a petition circulating in the country calling on President Trump to remove her from the post.

So, with the economy faltering and annual growth just above zero, what the country desperately requires is foreign investment. However, in several interviews, people cited the general lack of confidence and the drip-feed emigration of skilled South Africans of all colors as working against those needs. To pour oil on it, South Africa may soon be demoted to junk-bond status by the credit-rating agency Moody's, another nail in the future-investment coffin.

Crime has also been an ongoing feature of South African life. Once, Johannesburg was the epicenter of urban violence; now it has spread south to Cape Town and surrounding areas. There are muggings, armed robberies, and break-ins in the affluent Atlantic-seaboard suburbs, while Camps Bay and the Clifton beaches, favorites of wealthy international tourists, are now being targeted by armed gangsters.

The freeway that separates the bucolic winelands of Stellenbosch and Franschhoek from the city of Cape Town is also now something of a no-go area after dark. Bricks and rocks have been thrown at passing vehicles, and highway robberies are increasingly common. Friends who have lived in the orderly, manicured university town of Stellenbosch for decades report that their once unguarded homes are now targets of violent break-ins.

That South Africa is one of the world's most violent countries is not in doubt. According to United Nations Office on Drugs and Crime (UNDOC) figures, it is the eighth most homicidal country in the world, averaging 36 murders per 100,000 people-the highest murder rate for any country with a population of more than 35 million. As a measure of quite how violent the country has become, one need only compare it to statistics in more peaceful Western nations such as Spain (0.7 murders per 100,000 people) and Italy (0.67), while even the U.S. records just over 5 per 100,000. In 2018, the number of murders in South Africa topped 20,000 for the first time since the early 1990s, an average of 58 a day.

Adding to this toxic brew are radical political extremists such as Julius Malema, leader of the Economic Freedom Fighters (E.F.F.), and the even more extreme Andile Mngxitama, head of Black First Land First (B.L.F.), whose incendiary public statements would be regarded as hate crimes in most Western democracies. For a flavor of their rhetoric, you only have to watch YouTube clips of Mngxitama at a B.L.F. campaign rally. On a public platform in front of an excitable crowd, he announced that if a white person killed a black person, there would be blood. “We will kill the [white] women, we will kill the children, we will kill anything we find that is in our way, even their dogs and their cats, anything that comes before us.”

The highest murder rate for any country with a population of more than 35 million.

Last year, I flew to South Africa to write an article on the murder of my friend Annette Kennealy-a fine artist, farmer, and political activist-on her remote, mountaintop farm in the north of the country, and was shocked at the dark, violent path the country seemed to be traveling down. The sheer wanton brutality of Annette's murder-she was beaten with an iron bar, shattering both her arms as she tried to defend herself, then finished off with a rain of hammer blows to her head-beggared questions of an increasingly violent country. Is the brutality fueled by poverty? Is it a legacy of apartheid? Is it stimulated by the hateful rhetoric of the Malemas and Mngxitamas?

“We will kill the children, we will kill anything we find that is in our way, even their dogs and their cats, anything that comes before us.”

Over the past few years, both farmers and smallholders-often old, defenseless couples-have been targeted by gangs whose heartless cruelty has shocked a society that has become used to violent crime. Though only 62 of these farm murders occurred in 2018, according to a government statistic, many are acts of such savagery-one victim thrown into a bath of scalding water, another seared with a blowtorch, and another's kneecaps penetrated with a power drill-that you would expect to see them in a Quentin Tarantino horror fest. In one recent case, assailants rammed a plastic bag down the throat of a farmer's wife before shooting her twice at point-blank range.

Now all eyes are on Cyril Ramaphosa, a former anti-apartheid activist and trade unionist who became a successful businessman.

His challenge is to restore confidence, and that will be achieved if he pursues Zuma and his cronies through the courts, radically reforms the faltering state behemoths like ESKOM, and then persuades his highly skilled fellow South Africans not to leave the country. So far, the jury is out. Zuma and his corrupt cronies have yet to be jailed, although there are some encouraging executive appointments at the failing companies.

Meanwhile, the slow trickle of the country's brightest and best to foreign shores continues apace. Mandela once said that “as long as there are people of [Johann] Rupert's calibre and commitment, South Africa will never be a land without hope.” Recent rumors that Rupert-the international entrepreneur from Stellenbosch who is the chairman of Richemont, the luxury-goods group-had left the country and was now living in Europe caused concern in the business community. He had for some years endured a stream of abuse from the likes of Malema and Mngxitama, who ludicrously blame “white monopoly capitalists” such as he for the parlous state of the country.

However, Rupert assures me that although he is spending much of the year outside the country attending to his international empire, “My heart, and my dogs, are still in the Cape.”

As long as Johann Rupert's dogs remain in South Africa, perhaps there is a glimmer of hope.