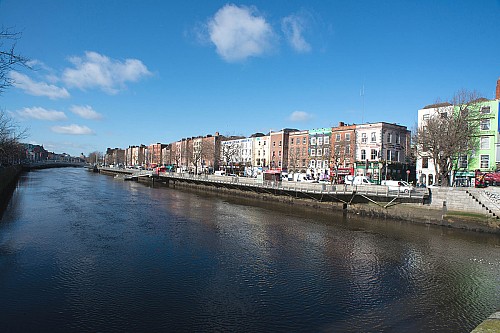 "The city`s changed since the `80s, and I`m grateful for that," Carney says. "Dublin in the `80s felt like Britain in the `50s-emotionally, architecturally, aesthetically. The church still ran the schools. Everyone just wanted to get away. Today, the city is multicultural, cosmopolitan, international."

As the credits roll, the audience stands, claps and cheers, and Carney and his young cast (including my daughter Lucy, who plays the main female role, Raphina) take to the stage. Dubliners, it seems, are fine with being reminded of how much their city has changed.

From bust to boom

Sing Street is set long before the Celtic Tiger years, that decade starting in the mid-1990s when dramatic economic growth, fueled by European Union investment and ballooning house prices, transformed the republic from one of the poorest countries in Europe to one of the most economically dynamic. After the boom, however, came the bust-sparked in 2008 by the world financial crisis. By January 2009, Ireland`s government debt had become the riskiest in the eurozone.

I decide to head out into the streets to see the changes for myself. When I was last here, in 2011, the ratings agency Moody`s had just downgraded the Irish government`s bond ratings to junk status. My friends who lived in and around the city were in shock and despair. Now Dublin and the Republic of Ireland are gradually recovering. The country has become one of Europe`s IT capitals; Google, Facebook, PayPal, Microsoft and eBay have their European headquarters here. And while Dublin may not rival London or Paris as a culinary capital, there are some excellent restaurants. The influx over the past few years of young people from the EU and beyond has given the city an international flavor that was absent in Carney`s youth.

A stroll through the Broadstone neighborhood on the north bank of the River Liffey reveals a formerly run-down part of town that is now buzzing with bars and the cafees. There`s a significant coffee culture here; most cafees are inexpensive spots run by enterprising 20-somethings, local and foreign. In restaurants such as the popular, award-winning Brother Hubbard on Capel Street, the emphasis is on value-for-money fresh ingredients; its eggs menemen , a classic Turkish dish of soft scrambled eggs with whipped feta yogurt, roast peppers and red onion, is worth a visit alone.

Ketty Elisabeth, a young French food blogger and food tour guide, directs me to Brother Hubbard after a mutual friend introduces us. She arrived in Dublin during the Celtic Tiger days, intending to stay for six months, but she fell in love with a Dubliner and has made it her home. Back in the middle of the boom, she says, "the food was terrible-there was just fast food and so-called fine dining, which meant expensive, predictable menus consisting of chicken, salmon or beef. Now the accent is on fresh, locally grown food at affordable prices."

She says Capel Street, previously known for its sex shops, is becoming one of the centers of the fine food industry, and she leads me a few doors down from Brother Hubbard to Camerino, a cake shop and bakery that an Italian-Canadian named Caryna Camerino opened at the end of 2014. "I was working in human resources and started baking cakes to sell at the weekend market. I got tired of firing people during the recession," Camerino explains from behind a counter piled with cakes and bread, all baked in the kitchen behind the shop. The shop now employs eight.

The restaurant and food boom has been accompanied by a sudden shift in tourism. Visitors to Ireland now come from a greater variety of countries: Thirty years ago, 70 percent of them were from Britain; today, that has fallen to 30 percent. The type of tourism has also changed; in the past, three-quarters of visiting Americans were identified as VFR (visiting friends and relatives), but most now have no ancestral connections and are thus more likely to book one of Dublin`s 48,000 hotel rooms, rather than stay with the relatives in the suburbs.

Back on the south side of the Liffey, where most of Dublin`s attractions lie, I head for the Liberties, once the heart of the city`s tannery and woolen industries. I am here to meet Jack Teeling, who is so confident that Dublin`s recovery is sustainable that last year he opened the first new whiskey distillery in the city in 125 years. Teeling comes from a long and uninterrupted line of Irish whiskey producers-one of his ancestors, Walter Teeling, opened the family`s first distillery in Dublin in 1782. (His father, John, owned the Cooley Distillery in County Louth for almost 30 years and in 2012 sold it to the American whiskey company Jim Beam.) Today, the Teeling Whiskey Co. is both a distillery and a tourist attraction that, he says, brought in 40,000 visitors in its first year of operations. It features a restaurant, tasting rooms and a shop selling Teeling whiskey, as well as branded T-shirts, cooking aprons, hip flasks and marmalade.

Teeling says Irish whiskey at the turn of the 20th century was the most popular spirit in the world. "The combined effects of the Easter Rising [the armed insurrection by Irish republicans to end British rule], the Irish war of independence and civil war all weakened the domestic market," he says. "This was soon followed by Prohibition in the U.S., and that decimated the industry. It was a car crash, then we fell off the cliff."

Teeling says his brand of small-production boutique whiskeys-the company produces nine different types-have an annual production of just 150,000 cases. Teeling says he used "inventory which I bought from Cooley" and made his own by maturing in barrels at this new distillery. The first whiskeys actually distilled here will come to the market in 2018.

Teeling says he is following a global trend of urban liquor production that has flourished in cities such as New York, London and San Francisco. "That`s why I wanted to start something that represented Dublin today-a sophisticated city, high-tech, cosmopolitan city. And we`re just drilling down and taking water from the Liffey. We`re starting to make real Dublin whiskey with real Dublin water," he says.

Carney is right. His city has changed dramatically since his Sing Street youth. And it`s a fine thing to see. But a pint of Guinness on my final evening in Dublin at the Swan in Aungier Street, one of the city`s oldest Victorians pubs, reminds me: There is still much to be said for the Dublin of old.