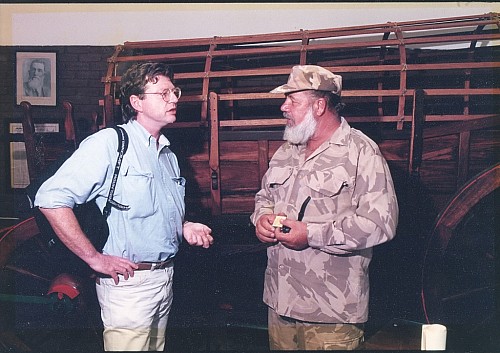 Terreblanche claimed to be a God-fearing defender of white Christian morality, however in December 1988 he was arrested at one of the sacred Boer monuments in some state of deshabille with the aforementioned peroxide blonde, a journalist named Jani Allan.
It was the smart, image-conscious Allan who persuaded Terreblanche to exchange his old-fashioned, ill-fitting black business suits for designer camouflage outfits and who dubbed him "Ramboer".
The scandal, and the subsequent court cases that revealed his penchant for green y-fronts with holes in them, damaged Terreblanche's image among his own people.
Like most Afrikaner organisations through the white tribe's 350-year history, Terreblanche's Afrikaner Weestandsbeweging (Afrikaner Resistance Movement –AWB) was constantly in a state of argument and division and that lack of unity, and the lack of discipline with which all underground organisations need to operate, diminished its power as a truly radical organisation.
So, by the time I met him in the early 1990s, in the volatile run-up to South Africa's first democratic elections, he had already been outflanked on his left by General Constand Viljoen's Afrikaner Volksfront and on his right by any number of extreme splinter groups with names like the Ystergarde (Iron Guard), Witkruisarende (Black Eagles) and Wit Wolwe (White Wolves).
I was writing a book about the end of white rule in Africa and we met for the first of several interviews in his office in the dull little Western Transvaal farming town of Ventersdorp.
A uniformed AWB foot soldier who led me to his office referred to Terreblanche as "The General", however this was a made-up appellation as his only legitimate military rank was lance corporal in the South Africa's citizen army.
Terreblanche's office was a tableau of Afrikaner symbols. Behind his desk was a full-sized ox wagon and beneath it was a Second World War Browning machine gun with ammunition belt in place. On the wall the portraits of the great Boer generals stared sullenly out on the man who claimed to be defending their legacy.
He was the epitome of Jani Allan's Ramboer, a big man with the rich, tanned skin of a farmer, a handsome white beard and piercing blue eyes that seemed to be standard issue for Afrikaner leaders of the time.
What he said that day I had already heard from other extremist Afrikaner leaders, but it was delivered with an oratorical flourish that was quite impressive and made me realise why he had held this emotional minority in his thrall for much of the 1980s.
He was demanding a separate white volkstaat (literally folk state) for his people and "there is no force on earth," he thundered, "that will stop the right wing going to war if these insane people try to create a unitary state in South Africa. We can raise more than 60,000 AWB commandos overnight."
Well, they did create the unitary state and the AWB didn't raise any commandos overnight. In fact, the sporadic bombings that threatened to derail the election were carried out by groups which had little contact with Terreblanche.
Even as he was strutting around his office that afternoon he was already yesterday's man. There is, however on last memory I have of Ramboer. As he was telling me he was prepared to die for his beliefs, he pointed to the Boer generals' portraits on the wall and said, almost wistfully, "in heaven, at least, I shall meet these great fighters. Isn't it wonderful? Even Paul Kruger. I would meet him in our volkstaat in heaven."
Ironically, in death, and particularly in the manner of his death, Eugene Terreblanche may not only have achieved his greatest wish but may also have more impact on South African politics than he did in life.
* Graham Boynton is the author of Last Days In Cloud Cuckooland