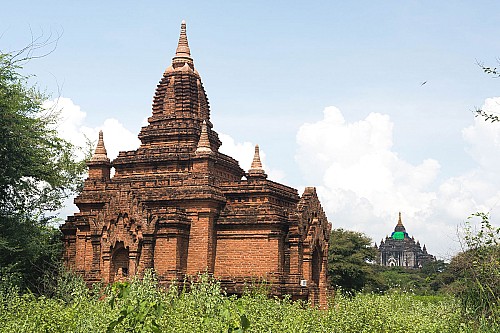 Kyaw is a tourist guide in Myanmar, where, last November, Aung San Suu Kyi`s National League for Democracy won the country`s first openly contested election since 1990. The election finally brought to a close the era of "the generals," a military junta that had presided in one form or another over civil war and human rights violations, and that prompted the imposition of economic sanctions by both the EU and U.S. Myanmar suffered, Kyaw says, "50 years of military rule and 14 years of chaos before that."

Now, though, he says he is "cautiously optimistic" about his country`s future. He has good reason. Kyaw is guiding myself and a small group of other European tourists on a luxury cruise up Myanmar`s Irrawaddy River; now that the sanctions have been lifted-by the EU three years ago, with the U.S. following suit this September-he can be confident that where we are going, more will follow. That`s because Western tourists continued to arrive, albeit in small numbers, as they did throughout the junta`s years in power, despite the pro-democracy movement`s call for a tourism boycott. What drew them were the country`s Buddhist temples, its World War II battlegrounds (where the British and Americans fought the Imperial Japanese Army) and the chance to explore the remote villages along the Irrawaddy River.

That`s exactly what we`re doing today, standing drenched in monsoon sweat in a dusty street in Katha, a large, ramshackle village on the upper stretch of the Irrawaddy. Katha is one of the principal administrative centers of central Myanmar; the writer George Orwell was stationed there in 1926 while working for the British-run Indian Civil Service and made it the setting for his first novel. Burmese Days isn`t read much now, at least not compared with Nineteen Eighty-Four and Animal Farm, but it should be: Written with Orwell`s habitual clarity, it is a bitter denunciation of British colonial rule in Asia, where drunken sahibs, pickled by heat and a drip-feed of gin, alternatively exploit and ignore the local populace.

Orwell`s reporter`s eye captures exactly the lush invasiveness of the jungle that surrounds Katha and many of the other Upper Irrawaddy villages we visit, where bamboo houses, built on stilts to deal with the great river`s regular floods, are shaded by the vivid green foliage of giant acacia trees. But the jungle is smaller than it was: Teak forest once covered 70 percent of the country. But now, after years of loggers deforesting with the backing of the junta and, more recently, the illegal activities of Chinese loggers, some reports suggest that figure is closer to 48 percent. Only 4 percent of the country is primary forest-the densest, oldest and most valuable kind.

As we walk past the house where Orwell lived-moldering and almost reclaimed by the jungle but still the residence of the local police commissioner-Kyaw pauses. "My grandmother talked about the colonial times as Burma`s golden days," he says. "After that, she suffered. First, the Japanese invaded. Then, between 1948 and 1962, the Communists and the underground insurgents were fighting against the central government, and they burned down her home and stole all her jewelry. In 1962, the dictator General Ne Win came to power and nationalized what was left of her possessions. So you can see how my family and many others in Myanmar have a fondness for the British."

The British also have a fondness for Myanmar-or Burma, as many still call it (the junta changed the country`s name to Myanmar in 1989, a move the pro-democracy camp resisted, though it now seems more ready to accept the name as a fait accompli). Tour operators such as Belmond and the Ultimate Travel Company have been working here for almost a decade. Ultimate took its first trip in 2007, the year of the so-called Saffron Revolution, when the country`s Buddhist monks rose up in a peaceful protest against the generals, a moment both Kyaw and his fellow guide, Min Htut, feel was the beginning of the end for the junta.

As the Belmond Orcaella, a shallow-draft riverboat with 25 cabins, chugs north from Mandalay deep into rural Myanmar, it passes numerous Buddhist shrines, their gold needle stupas standing out brilliantly against the drab backdrop of village architecture; Buddhism clearly has helped these people endure half a century of repression. As Min Htut says, "We are a contented people because Buddhism has taught us to be philosophical. The generals were bad Buddhists." Buddhism might not have been their only comfort: Posters of Suu Kyi and her father, Aung San, are displayed in many of the small village shops.

There is still a sense of discovery and innocence on this northern passage of the Irrawaddy. Few tourists come this far. The west of the country is still consumed with internecine tribal wars, most notably in Rakhine state to the northwest, where the minority Muslim population is under siege from tribal rivals. To the east, the area around Bhamo has been fought over by Burmans, Kachins, Chinese and government troops for years. So sensitive is the area that a planned firework display on the Orcaella was canceled in case local troops took it to be a demonstration of firepower.

On one of our last nights on board, Kyaw delivers an hourlong lecture about the junta years. He touches on the stripping of the teak forests, corrupt deals that handed copper mines to the Chinese, and the tens of thousands of monks, students and other representatives of the opposition that the generals ruthlessly eliminated. Yet he relates the country`s sorry political story without apparent rancor. He ends by saying that if he had given this talk 10 years ago, he would have been "disappeared."

Kyaw has voted, and he can speak; it`s a mark of how much Myanmar has changed.

Graham Boynton traveled with the Ultimate Travel Company, which arranges bespoke tours, including Irrawaddy cruises on the Belmond Orcaella.