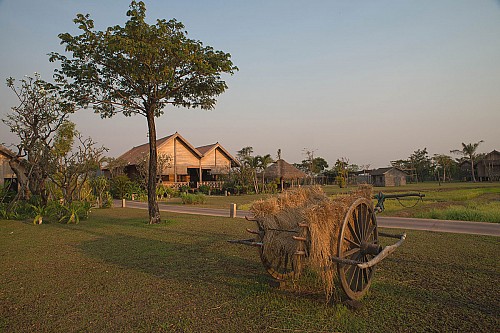 From a distance, the five cone-shaped spires constructed in the 12th century strike a clear contrast to the complex`s green lawns and blue sky. Once inside, as you climb the ruin`s worn stone steps, you can study the intricate Hindu bas-reliefs etched into the walls before Angkor became a Buddhist temple centuries after it was built. Today, the temples are still active in Buddhist rituals, and the comings and goings of saffron`robed monks are an integral part of life in Angkor.

Like most Western tourists, I`ve come to Siem Reap mostly for the purpose of visiting the 400 square miles of stone temples that make up the world`s largest religious monument. I spend several days walking around the medieval city looking at the temples, including Ta Prohm, a structure almost more dramatic than Angkor Wat, with its giant silk cotton trees and strangler figs that have become entwined in the buildings, as if the jungle has reclaimed this work of man and refuses to give it up.

Larger than the area of New York City, the Angkor temples are the remains of the capital city belonging to the Khmer Empire, which presided over much of Southeast Asia from the ninth to the 15th centuries.

French explorer Henri Mouhot`s writings about Angkor Wat in the mid-1900s brought it to the attention of the West, and it became increasingly popular with wealthy travellers in the mid-20th century-Charlie Chaplin visited in the 1930s and Jackie Kennedy in 1967. Tourism stopped abruptly in 1975 when the totalitarian Communist regime of the Khmer Rouge began its four-year reign of terror. The former guerrillas killed more than 1 and half million Cambodian people during their time in power.

Since the Khmer Rouge collapsed as a movement in the 1990s, tourism to Angkor Wat has grown phenomenally; only a few thousand people visited the site in the first years of the 1990s, while more than 2 million tourists made the trip last year. Cambodia has revived its tourism industry more recently than some of its neighbors, so it feels poorer and less developed-if also more authentic-than Vietnam, Thailand and Laos. But here and there, luxury has clearly arrived.

My stay at Phum Baitang, Siem Reap`s newest luxury resort, was a tranquil escape from the bustle of the city`s streets. The 45-villa resort, which opened late last year, is a collection of stilted huts set in eight acres of constantly tended gardens intended to resemble a Cambodian village. The property features soaring sugar palms, paddy fields and water buffalo. It is a short tuk-tuk ride from the center of Siem Reap, and as you enter Phum Baitang`s gates, you leave behind the dust and enter an oasis that offers guests spacious villas with comfortable large beds, two very good restaurants and an excellent spa. The resort has provided international travelers with a reason to linger for more than the couple of days usually put aside to visit Angkor Wat. (Phum Baitang saw a flurry of bookings after Angelina Jolie stayed there last year while making her latest film, which is based on a young woman`s account of her family`s destruction under the Khmer Rouge.)

But even outside the grounds of the resort, this laid-back river town is now home to other stylish hotels, excellent restaurants and designer shops. In the old French Quarter, "Kandal (meaning "middle") Village is a street of cafees, restaurants and shops. The stores include Trunkh, a Cambodian-inspired eclectic homewares and fashion brand, and Louise Loubatieres, where a London-born fashion designer sells silk scarves, lacquered bowls and delicate ceramics.

On my last night, I have dinner at Villa Chandara, a country restaurant just outside the center of Siem Reap, with Andy Booth, founder of the bespoke travel company About Asia Travel and a resident of Siem Reap for the past 12 years. An Oxford University graduate who made a fortune as a London banker in the `80s and `90s, he now operates as something of an entrepreneurial philanthropist in Siem Reap. He uses the profits from About Asia to help develop the country`s education system and has funded more than 100 schools and colleges across the country.

I tell him that for all the splendor of the Angkor temples, the nouvelle Cambodian cuisine and the smart new hotels, the friendliness and gentleness of the people most impressed me on this trip. He tells me that is precisely the reason he stays in Cambodia-so that he can help realize the dreams of a people who, despite their struggles, "retain an unerring optimism about their future," as he puts it.

Graham Boynton traveled as a guest of Cazenove + Loyd, which offers seven nights at Phum Baitang in a Terrace Villa, private airport transfers and economy flights from £2,500 ($3,000) per person, based on two sharing; CazLoyd.com.