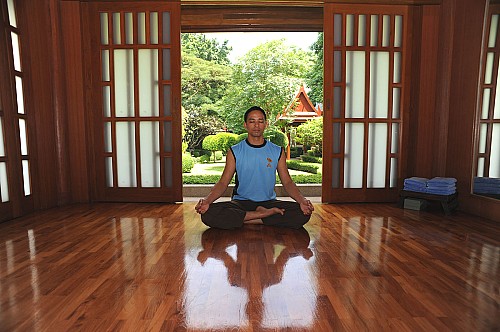 It is during this high-energy routine on my first morning at Chiva-Som, a luxury health resort in the seaside village of Hua Hin, that I have a sudden realization: I am a rather overweight, barely fit, middle-aged European male who spends most of his waking hours hunched over a computer. I am awkward, uncoordinated, out of breath and a rather poor representative of my species. This, for me, is the instant that I resolve to change the way I am. Mongkol fails to notice my epiphany. He just smiles messianically and tells me to do 15 more pushups.

Twenty-one years ago, similarly out-of-shape Westerners first started traveling to Chiva-Som to repair themselves physically and spiritually. Boonchu Rojanastien, a Thai politician and wealthy businessman, opened Chiva-Som in 1995, inspired by the British health resort Champneys. He originally intended the spa as a health retreat for Thai people. However, it was the Europeans who took to the place, savoring the combination of fabulous low-calorie Thai cuisine, exercise regimes under the guidance of fitness instructors and, of course, those signature Thai massages.

The 7-acre resort (its name means "haven of life" in Thai) is located in the Gulf of Thailand, some 115 miles south of Bangkok. It is essentially a health campus with 58 guest rooms, Thai-style pavilions and spa and restaurant facilities set just off a narrow stretch of beach. Chiva-Som offers more than 200 treatments and health-related activities and has 70 treatment rooms and 70 qualified therapists.

I`d needed a recharge for some time. I`ve worked out in gyms with monotonous regularity for more than 25 years-but I also like good food and wine. Those hours spent lifting and pushing in the gym had not really kept me lean but had, rather, just about kept an outrageously rotund alter ego barely at bay.

Before flying to Thailand, I had filled out an exhaustive questionnaire on my health, diet and stress levels. On arrival, I was interviewed and assessed by a very pleasant woman named Kannikar. Together, we laid out the weeklong program of healthy eating, intense exercise and bouts of meditation. Kannikar assured me that all of this would set me on course for a more balanced lifestyle. It sounded awful to me.

But so began seven days of pain and pleasure. Each day started with a cup of hot water infused with squeezed lime, followed by an hour of early-morning exercise, breakfast, then more exercise, then a break in the middle of the day and a low-calorie lunch, followed by more exercise. By late afternoon, when I was rewarded with a Thai massage and a further hour lazing around the sauna and steam room, I was exhausted. I had just about enough strength to take an early dinner either at the Emerald restaurant, which had an international menu, or the Thai restaurant, Taste of Siam, overlooking the beach. With every dish was listed the calorie, carbohydrate and fat content. Needless to say, it was all very low-cal.

Halfway through the week, I had a further consultation, this time with an American-trained naturopathic doctor who marries the ancient philosophies of Chinese medicine with the insights provided by modern Western medicine. He said his role was to encourage me to follow a better-balanced diet after I left Chiva-Som, and he showed me a list of "acid-forming foods" that are not particularly good for health: beef, pork, lamb, popcorn, alcoholic drinks, coffee, artificial sweeteners, ketchup. Unfortunately, I am rather fond of most of them.

Then he showed me another list of "alkalizing foods": vegetables, fruit, arrowroot flower, herbal teas and others that are all very good for you. I could see that this was all going to take considerable strength of will and a complete change of lifestyle. But my week at Chiva-Som convinced me that this was the correct path. Hamburgers, chips and chocolate may be seductive, but losing weight makes the sacrifice worth it.

By day four, I had become so committed to recalibrating my life that I even found myself attending meditation classes. I am not one of life`s natural meditators, but I began to enjoy discovering a long-hidden internal tranquillity. At the end of the week, my final consultation confirmed the benefits of my immersion in the Chiva-Som regime. Thanks to the exercise, the diet and the meditation, I lost around 10 pounds, and my blood pressure has dropped 25 points. As I write this, I remain committed to the health and fitness regime imposed by Chiva-Som. But the flesh is weak, and temptations are out there. Can I resist? I hope so. If not, I`ll be back at Chiva-Som for a refresher course in the not too distant future.