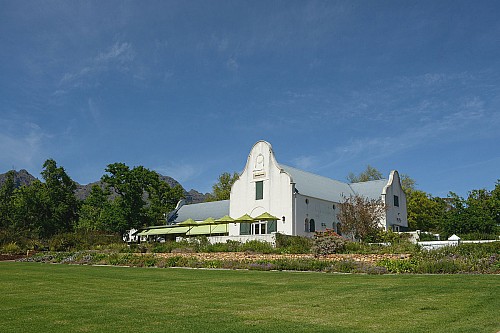 Franschhoek, the small Huguenot village in the neighboring valley, was a sleepy retirement outpost for white South Africans. For the most part, the wines were poor to average, and the cuisine was basic. Compared with California`s Napa, Australia`s Barossa and New Zealand`s Marlborough, the cape was a viticultural and gastronomic dead zone.

Today, almost 22 years after the end of apartheid, the region is one of South Africa`s most popular tourist destinations. Although the winelands remain a bastion of white privilege-some of these farmers` and landowners` families have been here for centuries-there are increasing numbers of black entrepreneurs, farmers and winemakers. The region has become a center of culinary excellence, with a booming wine industry that could rival any of its New World competitors.

Wealthy international travellers are not just taking vacations here: Many of them are so taken by its beauty that they have been buying real estate in the winelands. Virgin Group founder Richard Branson bought the Mont Rochelle Winery Estate in 2004, while Laurence Graff, founder of Graff Diamonds, bought the Delaire Estate in 2003 for $22 million. In 2013, Indian health care and telecom billionaire Analjit Singh bought 500 acres of Franschhoek vineyards, a stake in the award-winning Mullineux Family Wines, and Franschhoek`s most celebrated lodge and restaurant, Le Quarti er Francais.

The landscape of the winelands has always been spectacular, but the 35-minute drive there reveals South Africa`s enormous wealth disparity. Stellenbosch lies 50 miles east of Cape Town, and on the drive you pass the huge squatter settlements that sprawl across the Cape Flats. The shantytowns, which swell every year with waves of migrants from poorer parts of the continent, are now as much a fixture of the cape`s landscape as the affluent suburbs on the Atlantic Coast and the rolling vineyards of the wine country.

Stellenbosch is surrounded by the Jonkershoek, Drakenstein and Simonsberg mountains in the southeast and the Stellenbosch Mountains in the South. If you drive up and over the Helshoogte Pass, one of the country`s most scenic routes, you then drop down into the Franschhoek Valley. The town of Franschhoek started out in the late 17th century as a remote settlement for Protestant Huguenot refugees escaping religious persecution in Catholic France. It is now an attractive little town, its buildings in the cape Dutch style-all whitewash and curved gables. The place is full of wine shops, art galleries and a clutch of superb restaurants. Stellenbosch, a university town that is fast developing as an IT hub, remains the region`s sociopolitical center, but Franschhoek is the real draw for tourists.

On my latest trip to Stellenbosch, I stopped at an old favorite: Jan Boland Coetzee`s Vriesenhof Vineyards in the Paradyskloof Valley. It is, as Coetzee declares, "on the south-facing slope of the Stellenbosch Mountains, close to Stellenbosch town, close to heaven-just four doors away." An Afrikaner, a former member of the national rugby team and an outspoken reformist even in the worst days of apartheid, when he advocated profit-sharing schemes for farmworkers and supported breakaway, liberal elements of the ruling Afrikaner party, Coetzee remains revered among the winemakers of the cape, particularly the young, up-and-coming winemakers. We spent a few pleasant hours tasting his wines-chardonnays, red blends, his celebrated pinot noirs and his superb grenache-and talking about the evolution of the South African wine industry, the process of aging and, somewhat intensely, about South Africa`s political future.

Over the next few days, I visited several of the top vineyards: Waterford Estate, which is less than a 10-minute drive from Vriesenhof; Kanonkop, on the other side of Stellenbosch, which produces one of the country`s best reds (the estimable Bordeaux blend Paul Sauer); and Thelema Mountain Vineyards, which is perched on top of the Helshoogte Pass. In Franschhoek, I went to Johann Rupert`s L`Ormarins wine estate, a lavish sprawl of properties at the foot of the Groot Drakenstein Mountains, which also features the Franschhoek Motor Museum, an extensive collection of vintage cars from the Model T Ford through to 1950s sports cars and contemporary classics like the Ferrari Enzo and the Mercedes-Benz DTM Coupe.

As with California`s Napa and Australia`s Barossa, the cape has turned wine tourism into a sophisticated business. The estates, blessed by their natural beauty, offer the great pleasure of tasting quality wines in their various terroirs. They thus inspire their visitors to form a bond with these wines once they`ve returned home. But the real treat is the food. When you tour the cape`s vineyards, you also get to eat at superb restaurants at laughably low prices. Food and wine have always been relatively inexpensive for Europeans visiting South Africa, but the recent decline of the rand has probably made it one of the world`s cheapest places to eat high-end food.

Among the top restaurants in the Stellenbosch-Franschhoek area are the Test Kitchen at Le Quartier Francais, named one of the top 50 restaurants in the world in the San Pellegrino annual listings, where a nine-course tasting menu costs less than $70. And then there`s Delaire Graff Estate`s Asian restaurant Indochine, where a five-course chef`s selection costs around $40. Just across the road from Graff is Tokara, where chef Richard Carstens`s penchant is for Franco-Asian fusion (the dishes are somewhat El Bulli-ish in style) and a tasting menu will cost in the region of $30.

As the local currency continues to slide, the winelands and the region`s deal-of-the-century tasting menus will likely keep the cape one of the world`s best bargain destinations. But in truth, getting meal deals isn`t why you should visit the sloping vineyards and mountains that protect them. You visit the region that gave the world one of its ugliest political philosophies because it`s one of the world`s most beautiful places.

Graham Boynton traveled courtesy of Africa Travel (+44 20 7529 8550; africatravel.co.uk ), which arranges holidays to southern and East Africa. A trip to the cape, staying for four nights in Cape Town at the Table Bay Hotel, two nights near Stellenbosch at Hawksmoor House and two nights in Franschhoek, costs from £1,545 per person, including return British Airways flights, hire car and breakfasts throughout.