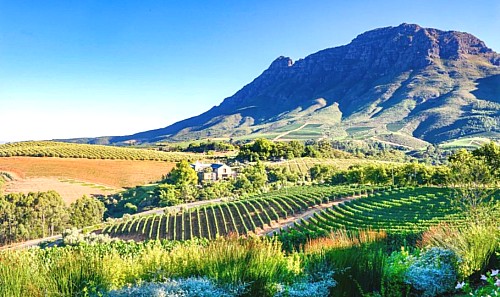 South African wines have suddenly come of age. Despite the fact that wines have been produced in the Cape since the 17th century - long before New World rivals California and Australia - it is only over the past decade or so that they have become more accepted, and indeed critically acclaimed, in the modern world.

The reasons for this renaissance are complex, but the basic truth is that since the end of Apartheid, which had consigned the industry to half a century of isolation, the Cape's winemakers have had free access to the international wine world. Thus trends, practices, and technological advances that are swirling through vineyards from Bordeaux to Napa to Mornington Peninsula have become part of Cape viticulture. In the bad old days, the industry was so tightly and centrally regulated that winemakers had to smuggle vines into the country in their babies' nappies or down their trousers. Now everything is permissible.

I remember taking the wine writer Oz Clarke to the Cape in the late 1980s and everyone was somewhat taken aback at how unimpressed he was. The legacy of leaf roll virus, endemic in South Africa, was evident in many of the wines we tasted and Clarke left the Cape mightily underwhelmed. How things have changed. Today, respected international critics such as Jancis Robinson and Tim Atkin have recognised and rightly feted these wines, with Robinson recently declaring that, “One of the great mysteries of the world of wine is why South African wine is not even more celebrated - the best examples offer wine lovers some of the finest value in the world today.”

Many of the great historic estates - Meerlust, Kanonkop, Muratie, and more - have simply upped their game. However, there have been dramatic innovations as well as on-point marketing nous from the industry's post-Apartheid generation, led by the Swartland Revolution gang (Eben Sadie, Adi Badenhorst, David and Nadia Sadie, and Chris and Andrea Mullineux) and more recently by an initiative called the Old Vine Project (OVP), which is a not-for-profit, public benefit organisation, whose objective is to protect the Cape's historic vineyards.

First, let me explain the geography. The Cape winelands are the most visually dramatic in the world. Soaring mountain ranges and sweeping valleys, all dotted with the white-washed, gabled Cape Dutch architecture that gives the region a sense of style and historic relevance, leave Napa, Barossa and the rest trailing. This region is steeped in the turbulent history of the old trading routes, the expansion of the European empires, and the colonisation of Africa. (Napoleon's favourite wine was Vin de Constance, a superb Cape sweet wine that is still being made today.)

The university town Stellenbosch is at the epicentre of the industry, but the vineyards spread far beyond, from the now-fashionable dry land region to the north called the Swartland (literally 'black land') to the cool-climate Hemel en Aarde (Heaven and Earth) Valley to the east. It is a fertile and spectacular wine region within easy driving distance of Cape Town.

The Old Vine Project was launched in 2016, with seed funding from the South African billionaire and wine-estate owner, Johann Rupert. Its purpose is to protect old vineyards and catalogue those gnarly, elderly vines (more than 35 years old) that, when correctly handled, produce small quantities of outstanding wines of character. According to the OVP's Andre Morgenthal, more than 45 of the Cape's wine estates that produce old vine wines have signed up. There are now more than 2,600 hectares (6,000 acres) that are this age in the Cape, but only 7% have been identified and used in existing wine brands. The rest are under threat of being dug up and replaced by younger, more productive wines or - heaven forfend! - by fruit trees.

Although Rupert was the brains behind the OVP, it was Rosa Kruger, a celebrated Cape viticulturalist and descendant of President Paul Kruger, who has been the driving force. Having catalogued most of the old vineyards and acted as a broker between the growers and the winemakers, Kruger and the OVP are hoping to push the price of grapes up from the present laughably low figure of US $180 a tonne to $900 a tonne. This compares with $7,000 a tonne in California and explains to some extent why South Africa's wines are so inexpensive compared to Australia's, New Zealand's and the USA's, and also why 60% of Cape wine businesses are either losing money or financially on the margins.

However, enthusiasts argue that our relationship to wine is one of passion rather than consumption, and the romance of the old vines is utterly compelling. As former foreign correspondent-turned-winemaker John Platter (of Platter's South African Wine Guide) says, “Who doesn't like the idea of sipping from the struggles of forlorn old vines, the more twisted and gnarly the better, stuck in a far-flung vineyard, that's defied everything nature and man has thrown at it for a half-century or more?”

I recently visited several OVP vineyards and would highly recommend any reader to follow suit. The first two - DeMorgenzon and Waterford - are among the most beautiful, visitor-friendly estates in the Cape. They charge around £4 for tastings and you can swirl and sip their wines while gazing at the Cape's wonderful mountains. And among the many reds and whites they're producing are old-vine Chenins Blancs that are beyond reproach.

Carl van der Merwe, DeMorgenzon's CEO and cellarmaster, tells me that The Divas - the special cuvee oldvine Chenin - came about almost by accident, after the Wine Spectator's then-correspondent Matt Kramer declared the first vintage (2013) one of the most brilliant white wines he had ever tasted, and urged van der Merwe to provide samples for the New York Wine Experience. He did and it won rave reviews. He has since produced a 2017 vintage, the current release, which is Platter's Guide's Chenin Blanc of the Year. They've only made 2,000 bottles and 800 magnums of the 2017 Divas vintage, so it is worth visiting the DeMorgenzon Estate for a bottle or two.

Across the valley at Kevin Arnold's Waterford Estate, I join a wine tasting with 30 other visitors, led by Arnold himself. This is probably one of the Cape's most sophisticated wine tourism destinations, with lunches and tastings held in the elegant courtyard of the Italianate winery and four-wheel drive 'safaris' offered to guests in the mountain vineyards.

Arnold established his reputation as a winemaker at Delheim and Rust en Vrede before he and Jeremy Ord launched Waterford in 1998. He is now one of the Old Vine Project's most outspoken advocates: “I hate the description 'good value South African wines' because it sounds like bargain basement,” he says. “The OVP is an initiative that has taken the position of upselling our wines. We have a product and a destination that is world class, and the OVP is realising its true worth.”

My final stop is in the Swartland. You need to book a tasting appointment at The Sadie Family Wines, for Sadie is arguably the country's most brilliant winemaker. His old vine series covers a range of varietals (Chenin, Cinsault, Grenache, Tinta Barocca, Semillon, Palomino et al), which Sadie, a laid-back surfer, describes in neat turns of phrase: “Cinsault is like your brother in jail... you can talk about it in the privacy of your home but not at parties.” However, his humorous exterior masks a serious winemaker whose selection of single vineyard wines from old vine parcels rescued from extinction justifies the very existence of the Old Vine Project and proves that these South African wines are top class.

SIX OF THE BEST

DEMORGENZON THE DIVAS CHENIN BLANC 2017
One of the finest Chenins in the Cape, if you can find it. Next vintage 2020.

NAUDE OLD VINE CINSAULT 2015
A stunning wine that Ian Naude rightly describes as “Young at heart with an old soul”.