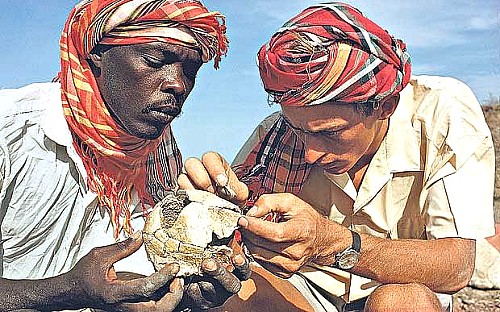 Angelina Jolie is planning to make a film about Richard Leakey, the controversial 69-year-old Kenyan palaeoanthropologist, conservationist, political fixer and indestructible Homo sapiens, is both good news and potentially bad news. That the Forrest Gump scriptwriter Eric Roth has been hired to write the film suggests the bad may outweigh the good.

First, let me say that I think Leakey is most deserving of a cinematic celebration, for over the past 50 years his life has been a stormy brew of successes, controversies and dreadful misfortunes – a kind of knockabout post‑colonial adventure that has taken place on a continent almost continuously convulsed by various forms of self-destruction. Amid the internecine wars, the famines, the economic catastrophes and the all-pervasive nepotism, tribalism and corruption of modern Africa, he has muscled his way to the top and become a major African figure. No other white man has achieved such success; but then, Leakey does not regard himself as a white man. “I am an African,” he says.

Along the way he has overcome incredible physical setbacks – he has had two kidney transplants, one liver transplant, and has lost both legs, which were amputated below the knee following a light aircraft crash in 1993. Yet for all his admirers – and they range from our Royal family through Hollywood film stars and assorted pop stars to the billionaire masters of the universe who fund his ambitious projects – he has an equally vociferous army of enemies who regard him as wilful, wrong-headed and vain.

On the day that Leakey’s Cessna 206 crashed, a group of distinguished African conservationists was meeting not 10 miles away in Nairobi. When news of the near-fatal accident, widely believed to be politically motivated sabotage, reached the gathering, there was a buzz of conversation. As it died down, a voice carried through the room: “Let’s hope he survives. If he dies they’ll add martyrdom to his long list of achievements.”

It is because of the complexity of the man and the intense complications of the theatre in which he has operated that a Hollywood film directed by Ms Jolie and written by Mr Roth gives rise to misgivings. She is a committed conservationist – a “bunny hugger”, to those hardened front-liners in the African bush – and no doubt intends to portray Leakey as the last hope for Africa’s wild animals. With Eric Roth’s assistance, I can see the film being a 21st-century morphing of Born Free and Out of Africa, with Brad Pitt taking the lead role.

I have known Richard Leakey for almost 30 years and he is much more than a latter-day Denys Finch Hatton, the big game hunter played by Robert Redford in the film of Out of Africa. On my most recent visit to Kenya earlier this year, I spent several days with him both at his remote stone house on top of the Ngong Hills and in the Masai Mara game reserve, and the first thing he said to me, somewhat grumpily, was: “I hope we are not just going to talk about endangered wildlife.” (Which was somewhat perverse, given that I was there to write about the current wave of elephant poaching and how his new conservation organisation, WildLife Direct, was planning to tackle it.)

However, his insistence on being recognised beyond wildlife conservation is understandable. The second of three sons born to the famed palaeoanthropologists Louis and Mary Leakey, he grew up in Fifties colonial Kenya and, despite his avowed intention to stay out of the family business, he soon capitulated and began leading fossil-hunting expeditions to Koobi Fora on the shores of Lake Turkana in northern Kenya.

In 1969, and again in 1972, Richard Leakey’s teams at Koobi Fora made fossil discoveries that would establish him as a global figure. The discovery of KNM-ER 1470, a 1.9 million-year-old skull belonging to Homo rudolfensis, projected him on to the world stage and in 1977 he made the cover of Time magazine. In the same year he published Origins and he later wrote and narrated The Making of Mankind, the celebrated BBC series on human evolution. The son had risen.

Leakey is a workaholic and although his academic record was dismal – he left school at 16 with a handful of poor O‑levels and all his doctorates are honorary – he has a restless energy and indefatigable intellectual curiosity. All of which may explain his next career moves, first running Kenya’s Natural History Museum and then, at the insistence of the country’s then president Daniel arap Moi, taking over the corrupt, bankrupt wildlife service.

It was in this latter post that Leakey used his international fund-raising skills to the maximum. He says he inherited an organisation that “was in a diabolical state – we couldn’t even buy fuel because we hadn’t paid our bills”. He set about persuading the oil companies to extend credit, with himself as personal guarantor; managed to blag 70 Land-Rovers from a local motor company; and, through his connections at the Belgian embassy, received a donation of 500 FN rifles for his anti-poaching patrols. On top of all this, he persuaded the World Bank to lend his new, corruption-free wildlife service $150 million, with a promise of a further $150 million after that.

Not surprisingly, Leakey’s donor-fuelled clean-up and the militarisation of Kenya’s wildlife services made him many enemies, particularly among the politicians and cronies who had been getting rich through the illicit wildlife trade. Many believe that the light aircraft crash was sabotage, although nothing has been proved.

After the crash he lay in Nairobi General Hospital, stubbornly refusing to be transferred to a European hospital, determined to keep his hand on the tiller of the Kenya Wildlife Service from his bed. Finally, he was persuaded to seek a second opinion and in mid-June 1993, Christopher Colton, a trauma specialist who had operated on Prince Charles, flew to Nairobi. When he arrived at the hospital, Colton later said: “I could smell the infection from the end of the corridor. Richard was dying.” Colton had him transferred to hospital in the UK and, after a series of unsuccessful bone grafts, amputated both legs.

Leakey made a remarkable recovery. Within days of having artificial legs fitted, he was walking on them. He says: “The only thing I lost is my feet, and I wasn’t running the wildlife service with my feet. It was a bad accident and six months in hospital wasn’t easy… but it passed.”

And so he moved on to the next thing, which was to form a political party to oppose Moi’s long-running ruling party. Although during the election campaign he was attacked – actually bull-whipped in the street – and, he says, two attempts were made on his life, his opposition party, Safina, managed to get seven members into parliament. What followed for Leakey was a short spell in parliament, a short second spell as head of the Kenya Wildlife Service, and then an equally short spell as President Moi’s head of the civil service. With each of these public portfolios, Leakey now says, he was excited by the challenges but eventually became bored and disillusioned by the political machinations that seem to hinder progress throughout post-colonial Africa.

Instead, in recent years his ceaseless energy has centred on two particular projects that are even wilder in ambition than any he has undertaken in the past. The first is to create a massive 5,000-hectare Science Park at Lake Turkana that will tell the story of humankind and will take between 10 and 20 years to complete. He says he already has $10 million committed by a single donor, “and if I can get that finished, this will be an appropriate legacy”.

The second project involves the Tanzanian government’s controversial decision to build a highway through the middle of the Serengeti National Park. While most international conservationists have been howling in collective outrage at the very idea of a tarmac highway running through this World Heritage Site, Leakey’s response has been one of pragmatic Africanism. Based on the belief that the Tanzanians will go ahead with the plan, he and Daniel Libeskind, the architect responsible for New York’s One World Trade Center, have come up with the idea of an elevated highway that would soar above the Serengeti, allowing the migrating wild animals to pass underneath unhindered.

For any man approaching his 70th birthday these are extravagantly ambitious projects. For someone who last year had a liver transplant and who has been given up for dead several times, they can be regarded as beyond the call of normal mortals. But Richard Leakey is no normal mortal – and, besides, he’ll certainly want to hang around long enough to see Brad Pitt or another of Hollywood’s favourite sons play him, however cheesy and historically inappropriate that may be.