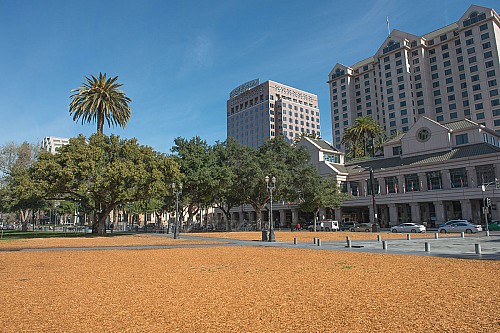 Whatever you do, avoid asking anyone "Do You Know The Way To San Jose?" when visiting this Californian city.

The locals are sick of hearing it. It was almost 50 years ago that the Dionne Warwick song put this previously unheard of place on the map, and since then almost every visitor has attempted to jokingly quote the title.

Instead, residents want San Jose to be known as the city that has changed the new world.

It's the capital of Silicon Valley, the epicentre of the digital revolution, and close to the place where the two Steves - Jobs and Wozniak - started Apple in 1976.

They also want it recognised as the most culturally and racially diverse city in the United States.

According to Laura Chmielewski, who was brought here from Chicago to help promote the city as a tourist destination, "in 100 years' time, this will be seen as the Athens of the modern world".

Having achieved world domination in the tech world, San Jose is now looking to diversify into tourism.

Last week, British Airways began the first daily service between the UK and Silicon Valley - appropriately, it is flying the world's most high-tech aircraft, the Boeing 787 Dreamliner, into Mineta San Jose International Airport.

San Jose's rise to prominence as the centre of the tech revolution is not at all surprising to local cultural historians. They argue that it has always been a place both for free-thinkers and for artists.

There is a significant psychedelic legacy from the mid-1960 - Ken Kesey and his Merry Pranksters held the second of their famous Acid Tests here, and those standard bearers of the psychedelic generation, the Grateful Dead, played their first concert in the area.

It was a psychedelic legacy that linked the hippies with the tech generation.

Steve Jobs was quite open about taking LSD as a student and claimed "it was one of the most important things in my life.

It reinforced my sense of what was important - creating great things, putting things back into the stream of history and of human consciousness as much as I could".

That ongoing stream of tech consciousness is also admirably demonstrated in the best museum I've visited in years - the Tech Museum of Innovation.

While most sites are repositories of historical artefacts, this one is a vital living community resource for education.

Last year, it was awarded the National Medal for Museum and Library Service, the highest honour awarded to such a venue in the US.

Not surprisingly, it is frequently crowded with groups of young schoolboys and girls, as the next generation seek to emulate the feats of Jobs and Wozniak.

But even for more mature children like myself, there are enough interactive challenges to keep you going for hours.

Google's chief executive Eric Schmidt famously said that every two days "we create as much information as we did from the dawn of civilisation up until 2003", and you can all but feel this happening at the Tech Museum.

Here are some brief examples: The Earthquake Platform recreates eight earthquakes that have taken place in recent memory.

Body Metrics explores the applications of wearable technology and you can walk around the museum measuring brainwave activity, heart rate and muscle tension, with the resulting data displayed on the smartphone you carry with you.

Cyber Detectives is the first interactive exhibit covering cyber-security in the US and teaches you how to prevent criminal invaders.

And the piece de resistance is the Anatomage Table - a virtual human cadaver lies embedded on a table, allowing you to investigate all parts of the anatomy, rotating and slicing soft and hard tissue without any of the unpleasantness of dealing with a real corpse.

When you are finally worn out by all that information, you can revert to exploring some of the natural splendours for which this part of California is rightly celebrated. After all, there are about 300 days of sunshine to enjoy every year.

Not only is San Jose itself a pretty city with a mixture of late 19th Century and contemporary architecture, and parks such as Plaza de Cesar Chavez, but it is also close to some of the state's wonderful attractions.

On a single weekend, you might surf in Half Moon Bay (30 miles from downtown), and then go skiing around Lake Tahoe, which is a three-hour drive away).

Alternatively, you could head east to the wilderness of Yosemite National Park. And if that doesn't satisfy you, San Francisco is just 50 miles away. The choice is yours...