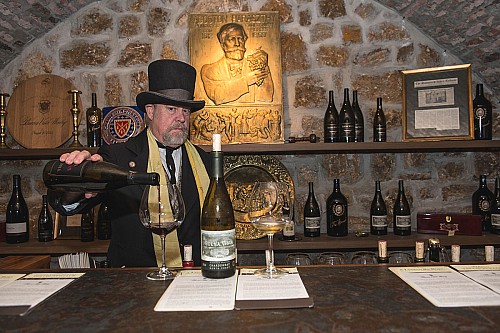 "No, you`re not," I say, but he ignores this and plows on. "As an introduction, I should tell you we make food-friendly wine here, elegant wine, not overly extracted, oaky or alcoholic. We often name special wines after members of my family. The Eleanora chardonnay is named after my wife."

The real Count Agoston Haraszthy, the first Hungarian to immigrate to the U.S., is widely recognized as the father of Californian viticulture. He built the first stone winery here in 1857, which would make the man standing in front of me almost 200 years old. In fact, he finally reveals himself to be a local character actor by the name of George Webber. Once that is established, we get on with the tour and tasting, without further theatrical flourishes.

Count Haraszthy`s legacy is booming. California is one of the world`s largest wine-producing areas, with an annual production of 3 billion bottles. Along with its better-known neighbor Napa Valley, Sonoma County is at the industry`s epicenter. Its proximity to San Francisco-it`s about an hour`s drive from the city-has made it an increasingly popular side trip both for locals and international visitors. At the same time, the region has, during the past decade, dramatically improved what it calls its "tourism offering," with onsite gourmet restaurants, tasting rooms and cellar-door sales on its estates.

Buena Vista is low-key compared with the next stop on my wine tour. At the Francis Ford Coppola Winery in Geyserville, at the northern end of Sonoma County, a movie museum and vacation resort combine with viticulture to draw in 150,000 visitors a year. I arrive to Bruce Springsteen and the E Street Band blasting over the estate`s public address system and, before I get to the tasting room, find myself wandering around displays of Coppola film memorabilia-Don Corleone`s desk from The Godfather, the go-go boots and miniskirts from Apocalypse Now`s Playboy Bunnies, and Vlad the Impaler`s armor from Bram Stoker`s Dracula. Beyond the film museum is a restaurant celebrated for its Argentinian short ribs, as well as tasting rooms where you can sample some of the 48 wines the Coppola organization produces.

The Coppola wine corporation, which also has a major vineyard in Napa, pumps out a million cases a year; Buena Vista produces 100,000 cases. By comparison, most Sonoma wineries are tiny, turning out between 5,000 and 10,000 cases a year. They survive by selling their product directly to club members and visitors. According to Glenn Siegel, Sonoma viticulture expert and founder of the retailer Wine Spectrum, the boutique nature of the local wineries is a compelling reason to visit the region. "You won`t often find their wines in restaurants or retail stores outside the state," he says. "It is also a relaxed, physically beautiful, down-to-earth area with friendly people." And, as Siegel notes, Sonoma makes outstanding pinot noirs and chardonnays, many of which have been given more than 90 points out of 100 by Robert Parker, the stern but globally influential American wine critic.

After two showbiz operations, it seems appropriate to visit a couple of the boutique vineyards. The first is Bacigalupi Vineyards, just outside Healdsburg in the heart of Russian River, where the microclimate is warm enough to produce petite sirah and cool enough to make chardonnay and pinot noir. Members of the Bacigalupi family have been here since the early 1900s, when their great-grandfather arrived from northern Italy. His descendants-Charles, a local dentist, and his wife, Helen, a pharmacist-bought 120 acres in the 1950s and have been producing award-winning chardonnays and luscious pinot noirs ever since. Their exuberantly knowledgeable granddaughter Nicola is now in charge, making fewer than 300 cases of each varietal every year; the best way to buy is to visit the tasting room, meet Nicola and walk away with a case.

More dramatic is Fort Ross Vineyard, located on undulating coastal hills that look down onto the Pacific. To get there, one drives along the winding state Route 116, through what remains of a giant redwood forest, and then for a few miles along California state Route 1, aka the Pacific Coast Highway, the famous road that twists and turns up the Californian coastline from Orange Country all the way to Mendocino.

Fort Ross is owned by another immigrant family, Lester and Linda Schwartz, who arrived here from South Africa in the mid-1970s. They originally intended this 1,000-acre farm to be a retirement home, but having planted a small block of the South African varietal pinotage "for sentimental reasons," were gradually drawn into planting the cool-coastal pinot noir and chardonnay vines that now make up the bulk of their wines. A rapid tasting of three single-vineyard pinots, a chardonnay and a pinotage confirmed Parker`s assessment of the Fort Ross wines as "outstanding." Count Haraszthy would have approved.