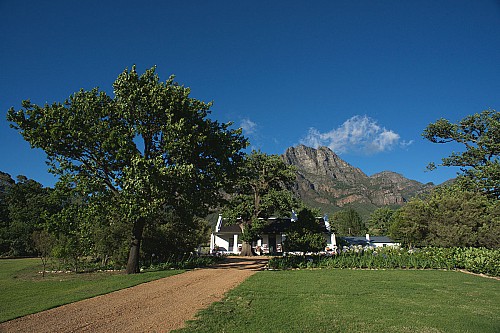 South Africa`s Western Cape is barely Africa. It is more like a mix of California and the Mediterranean than the southern end of a turbulent continent. The region is physically cut off from the Sturm und Drang of postcolonial Africa by a cordon of massive mountain ranges, a cordon sanitaire of granite, if you like. So foreign is the Cape that people who translocate here from other South African cities are said to be "semi-grating". And these soaring mountains and dramatic sweeping valleys have bestowed upon the Cape the most striking winelands on the planet, reason alone to travel here.

What`s more, as the South African rand continues to weaken against the pound, the country becomes laughably cheap for holidaymakers. As we went to press the exchange rate was 23 rand to the pound. Five years ago it was half that, and in the late Eighties it was 3.8 rand to the pound.

It has taken a while, but the Western Cape is now making the most of its wonderful produce and its indigenous creative zeal. My mission was to travel through a significant part of the winelands - from Cape Town, to Stellenbosch, to Franschhoek, to the Swartland - to find the best of the best.

Start at Luke Dale-Roberts`s The Test Kitchen (0027 21 447 2337; thetestkitchen.co.za) - it`s the hot Cape Town ticket, so you will have to book well ahead. The decor gives it an industrial workshop feel - bare wood, stone floors and exposed steel piping everywhere - and the open kitchen allows you a close-up of Dale-Roberts and his chefs at work. Innovative dishes, many with strong nouvelle Asian cuisine influences and/or classical French references, draw on fresh South African ingredients. Try the scallops, pork belly or pan-seared springbok, which are all outstanding. The six-course Discovery Menu costs £22 and the eight-course Gourmand menu £50 (£68 with paired wines) - ludicrously cheap for such fine food.

Easier to get into, cheaper and less formal is The Pot Luck Club (0027 21 447 0804; thepotluckclub.co.za), Luke Dale-Roberts`s other restaurant at the Biscuit Mill in Cape Town. It is on the top of the building, has a great atmosphere and serves excellent food.

A few miles from The Test Kitchen, just around Table Mountain, is Constantia - one of the city`s oldest suburbs and the Cape`s first recorded wine region, established in the mid 17th century at the behest of the Cape`s first governor, Simon van der Stel. The best restaurant here is Greenhouse (0027 21 794 2137; collectionmcgrath.com) in the Cellars Hohenort Hotel at 43 Brommersvlei Road. Unlike most hotel restaurants, executive chef Peter Templehoff`s elegant 45-seater offers cutting-edge cuisine with an emphasis on local ingredients. Liveried waiters deliver duck and porcini pastille and slow-roasted crispy duck with honey ginger jus. It is an adventurous menu that doesn`t take itself too seriously - lobster sandwich, miso and sesame macaroons and goat`s cheese cupcakes lead you to slow-cooked Karoo lamb chops and coconut-crusted lamb heart. Tasting menus from £40.

Close to Cape Town is Noordhoek, a coastal suburb some 20 miles from the city and the location of Cape Point vineyards, where Duncan Savage makes international award-winning wines. Nearby is the Foodbarn (0027 21 789 1390; foodbarn.co.za), where chef Franck Dangereux serves up a Cape version of French country cuisine as well as outstanding tapas. In the summer, well worth visiting is the Thursday market which takes place on the slopes of Cape Point vineyards, a giant picnic featuring wines from the estate and food from local producers. The view overlooking the five-mile-long Kommetjie beach alone is worth the trip.

Thirty miles from Cape Town is this famous university town, established in 1685, soon after the first Europeans settled in the Cape . It is also at the heart of the country`s wine industry, and fanning out from the Dutch-gabled town centre are the wine estates that have made the region`s reputation. In the Blaauwklippen Valley just outside the village is Waterford (0027 21 880 0496; waterfordestate.co.za), one of the most tourist-friendly wine estates. Cellar master Kevin Arnold not only makes marvellous wines (the flagship Jem, the Library Collection blends) but also leads vineyard safaris through the estate and conducts chocolate and wine tastings at the winery.

Nearby is one of the great characters of the Cape winelands: Jan Boland Coetzee, former Springbok rugby hard man, brilliant winemaker and progressive, inclusive member of the new South Africa. His Vriesenhof Eestate (0027 21 880 0284; vriesenhof.co.za) is on the south-facing slope of the Stellenbosch mountain - and his pinot noir is worth the journey alone. The 2011 grenache is also worth tasting.

For two of the best restaurants, and two outstanding wineries, in the Stellenbosch area, one is required to drive to the peak of the Helshoogte Pass, the sweeping highway that takes travellers across into the Franschhoek Valley. Delaire Graff (0027 21 885 8160; delaire.co.za) was bought in 2003 by the diamond billionaire Laurence Graff and over the past 10 years has been transformed into a wine estate, a five-star boutique hotel with spa, a burgeoning art collection and two restaurants. The main one provides spectacular views of the Simonsberg mountains to go with lunch on the terrace, described as "bistro chic" and featuring estate-grown ingredients. The farmed kabeljou (Dutch for cod) is delicious. However, I would recommend dinner at the property`s small, discreet Asian restaurant Indochine, where a five-course chef`s selection includes delicious tuna tataki and Thai tom yum khaa for around £35 without wine.

Across the road from Delaire Graff is Tokara (0027 21 885 2550; tokararestaurant.co.za), an estate owned by one of South Africa`s wealthiest men, the banker G?T Ferreira. He has spared no expense on this wonderful architectural statement. It is both an award-winning winery and the location of one of the Cape`s most innovative restaurants, the latter offering one of the great views in the area. Although chef Richard Carstens has a penchant for Franco-Asian fusion, the dishes are somewhat elBulli-ish in their deconstructive creativity. Try his beef tartar and sashimi with katsuoboshi, sorbet, daikon, tomato and red pepper dashi as a starter, and move on to the baked Alaska with rainbow trout as a main or springbok with carrot puree, peaches and curry jus. That you pay just £18 for Carstens`s tasting menu is extraordinary.

Down the other side of the Helshoogte Pass, you enter the Franschhoek Valley - one of the Cape`s top tourist attractions. What started in 1688 as a remote settlement for 180 French Huguenot refugees is now a retreat of significant physical beauty, a pretty little village of wine shops, art galleries and a clutch of excellent restaurants.

The most famous is The Tasting Room at Le Quartier Francais (0027 21 876 2151; lqf.co.za) , whose chef, Margot Janse, is the godmother of the new Cape cuisine. Recognised as one of the top nouveau chefs in the world, Janse says her food is a celebration of indigenous South African ingredients. Dishes such as salted farmed kabeljou and confit suckling pig with fynbos caramel provide a startling gastronomic adventure. A nine-course dinner - starting with "black pepper snow, beetroot and lime" and ending with "baobab, coconut, honeybush and caramel" - costs around £50.

Other restaurants to consider in Franschhoek include Fo liage (0027 21 876 2328; foliage.co.za), opened by Chris Erasmus, a Margot Janse protege who is already getting rave reviews for his cuisine. For lunch I recommend Bread & Wine (0027 21 876 4004; breadandwine@moreson.co.za) on the Moreson Estate, where the chef is Neil Jewell, a transplanted Englishman known as Mr Charcuterie in the Franschhoek Valley. His wagyu bresaola and biltong (dried beef) and mouth-watering cauliflower cheese risotto are triumphs. Two courses cost £16.

While in Franschhoek it would be remiss not to visit Anthonij Rupert Wines (0027 21 874 9041; rupertwines.com), the most beautiful winery in the area, with two tasting rooms and great views of the Franschhoek Valley and the Groot Drakenstein Mountains.

The hippie/surfie/wannabe astronaut winemakers - under the collective banner of Swartland Independent Producers - are regarded as the hottest new thing in the Cape. Some 35 miles north of Stellenbosch, the Swartland is raw, spectacular countryside with soaring mountains and dramatic valleys. But most of the small-production, family winemakers are somewhat reclusive and hard to find, living as they do at the end of corrugated dirt roads. Where you will find them is in the small village of Riebeek Kasteel during the annual celebration called The Swartland Revolution. Now in its sixth year, this is an enormous party in early November comprising seminars, dinners and wine tastings.

Graham Boynton travelled as a guest of Africa Travel (020 7529 8550; africatravel.co.uk), which arranges holidays to southern and east Africa.

A trip to the Cape, staying for four nights in Cape Town at The Table Bay Hotel, two nights near Stellenbosch at Hawksmoor House and two nights in Riebeek Kasteel at The Royal Hotel, costs from £1,545 per person.