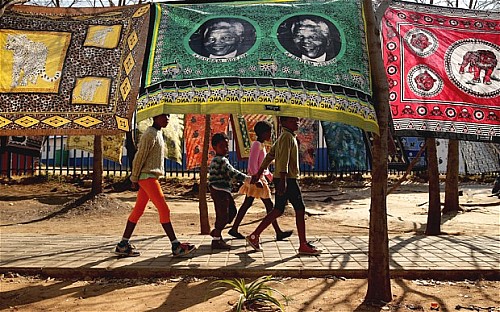 This article was published on December 6, 2013, following Nelson Mandela's death. We have reproduced it here to mark 25 years since he was released from prison.

A photograph of Nelson Mandela wearing the green-and-gold jersey of the Springboks and presenting the team’s captain, Francois Pienaar , with the 1995 Rugby World Cup remains the defining image of post-apartheid reconciliation in South Africa: the black president and the white Afrikaner, faces wreathed with smiles, mutual admiration clear for everyone to see.

That moment transformed South Africa’s image in the eyes of the world. No longer a racist, pariah state, it was now a country the civilised world could embrace. And perhaps even visit.

Before the release from jail of Mandela in 1990, the unbanning of the African National Congress (ANC), and the 1994 democratic elections, South African tourism statistics were notoriously unreliable. Arrivals from neighbouring African countries such as Swaziland, Namibia, Lesotho and Botswana were ignored or discounted by the race-obsessed regime. There was certainly a trickle of visitors from the West, particularly from Britain and other colonial countries such as Australia and New Zealand. As international protests against apartheid gathered momentum during the 1970s and 1980s, however, it became unthinkable for people of conscience to visit the country. When musicians and artists began a boycott, many tourists followed their lead.

Sudden democratisation in the early 1990s led, unsurprisingly, to a tourism boom. Between 1993, the last year of white-minority rule, and 2012, the number of holidaymakers in South Africa had almost trebled from 3.4 million to 9.2 million.

According to Michael Lutzeyer, owner of Grootbos, an award-winning eco-resort just outside Cape Town, “when Mandela came to power it felt as if we too had been set free”. Lutzeyer bought Grootbos as a family home in 1991 and transformed it into a luxury resort, opening in 1995. “A place like Grootbos,” he said, “which depends for its existence on foreign tourists, would simply not have existed before then. The Swedes, Germans and Dutch, who make up a big percentage of our visitors, used to avoid South Africa out of principle.”

The impact Mandela had on the way in which South Africa was viewed as a destination was acknowledged almost immediately after his death on Thursday night by Thulani Nzima, CEO of South African Tourism. He said: “Travel anywhere and say you are from South Africa and without a doubt the first word people will utter is 'Mandela’. He opened up our beautiful country, once a pariah state, to the rest of the world and his name alone has attracted millions of tourists wanting to walk in his footsteps to South Africa every year.”

The rise in tourist numbers was not however, solely down to Mandela. Colin Bell, co-founder of Wilderness Safaris and one of the pioneers of luxury safari tourism in the region, said: “Democratisation meant Western tourists were free to come here without shame. Then the word went around that it was a beautiful country, and so the numbers grew.

“In so far as Mandela was one of the central characters who guided the country to peaceful transition to democracy, then of course there was a 'Mandela effect’, but I don’t think people come here necessarily to celebrate the man, rather than the country.”

Sadly, the Mandela legacy has been somewhat tarnished in recent years by unseemly squabbles among his relatives and by the dereliction of the Nelson Mandela museum in the Eastern Cape, his tribal homeland (see below).

And earlier this year the local newspapers were full of reports of divisions between his daughters, Makaziwe and Zenani, and his grandson, Mandla, over the Mandela millions.

These blemishes aside, elsewhere in South Africa, the museums and historic sites relating to apartheid and the struggle for freedom are very much intact, and for any visitor interested in the country’s stormy passage from 1948 to 1994 the rewards are rich.

I would particularly recommend the two major Johannesburg museums: the Hector Pieterson Museum in Soweto, named after a 12-year-old boy shot dead by police in the 1976 student uprising, and the Apartheid Museum in Gold Reef City, which provides a graphic recreation of life under the old regime. Then, of course, there is Robben Island, the bleak, remote prison off the Cape coast where Mandela and the outlawed ANC leaders languished for two decades.

There are three distinct geographical regions to explore on any “Mandela Legacy” tour. First, in the Eastern Cape, there are the birthplace and the villages where, as a member of the Thembu royal family, Mandela spent his early years. Sadly, as described above, this is now a pilgrimage of dubious dependability, and given the distance from the major tourist centres, should probably be avoided.

Second, there is the Johannesburg area, where the young Mandela became a human-rights lawyer and political activist in the 1950s, the early days of the Afrikaner-led Nationalist government. At the tiny house in Ngakane Street, Soweto, he lived initially with his first wife, Evelyn, and then briefly with the more notorious Winnie, whom he married in 1958. (In the 1980s Winnie led a gang of wild youths in Soweto on a campaign of violence that included kidnapping, torture and several murders. Although she escaped prosecution, some of her followers were jailed.)

Although Mandela spent little time there – in the early Sixties he abandoned his pacifist stance, founded Umkhonto we Sizwe (Spear of the Nation) and went underground – this was the spiritual home to which he and Winnie returned after his release in 1990.

The third, and most compelling, sector of the Mandela tour is in the Western Cape. He arrived on Robben Island in 1964 and was to remain in an 8 x 7ft cell in this bleak prison for 18 years, after which he was transferred to Pollsmoor Prison, which now stands opposite the opulent Steenburg golf course and wine estate. Finally he was taken to Victor Verster prison (now Groot Drakenstein Prison), also in the Cape winelands, from which he emerged in front of the world’s press in February 1990, arms raised in triumph, to a euphoric nation.

I was in South Africa that famous day. Having studied and worked there in the apartheid years, and eventually been deported for my anti-apartheid activities, I felt it was indeed a day of deliverance. What capped it was Mandela’s appearance on the balcony of the Cape Town City Hall, from which he addressed an ecstatic gathering below.

He repeated the words he had spoken during his trial for treason in 1964, when he faced the death penalty, declaring that he cherished “the ideals of a free and democratic South Africa where people of different races can live together in peace and harmony with equal opportunities. It is an ideal I want to live for but, if necessary, it is an ideal I am prepared to die for.”

These words have reverberated through South Africa’s history.

Umtata, the capital of the Wild Coast region, is an hour’s flight from Johannesburg and three to four hours by road from Durban. It was in the village of Mvezo, 18 miles from Umtata, that Mandela was born, and in Qunu, 13 miles away, that he spent his youth and returned to in his later years. The Nelson Mandela Museum (nelsonmandelamuseum.org.za), in Umtata, which was opened in February 2000, is run-down and not worth visiting. The remote rural villages do provide an important backdrop to Mandela’s life, but most visitors are likely to find them disappointing.

this is possibly the most vibrant part of the Mandela trail, not least because Soweto, at the centre of the tour, is these days such a lively and entertaining city. You can visit Mandela’s original house, now the Mandela Family Museum (8115 Orlando West, on the corner of Vilakazi and Ngakane; 0027 11 936 7754; mandelahouse.co.uk).

It contains a rather random selection of memorabilia, including Mandela’s many honorary doctorates, paintings, photographs and a title belt donated by the boxer Sugar Ray Leonard. The house was famously petrol-bombed during Winnie Mandela’s reign of terror in the late 1980s.

The area is steeped in references to the anti-apartheid struggle, and just around the corner is the Hector Pieterson Museum, at 8287 Khumalo St, Orlando West (11 536 2253).

Also nearby, in Vilakazi Street, is the home of Bishop Desmond Tutu, the Nobel Peace Prize winner.

Outside Soweto are several equally important locations. Near Gold Reef City is the Apartheid Museum (apartheidmuseum.org; admission fee: R60 for adults and R45 for pensioners, students and children).

Lilieslief Farm (11 803 7882; liliesleaf.co.za), in northern Johannesburg, is one of the centrepieces of the ANC’s struggle, where its leaders met and plotted and where in July 1963 a police raid ended in the capture of 19 ANC officials who were later tried for treason. It is now a historic museum and well worth visiting.

Imprisonment to empowerment: the Western Cape

Garth Angus, of Footsteps to Freedom Tours (footstepstofreedom.co.za), can arrange bespoke Mandela-themed itineraries. He recommends a day-long tour that would begin with a morning excursion to Robben Island, guided by former prisoners, a drive to Pollsmoor Prison, where you would have a simple lunch cooked by the inmates (no tipping allowed), and a guided afternoon walk around the centre of the city, starting at the historic Mount Nelson Hotel and taking in the parliament buildings, Tuynhuys, the president’s offices where Mandela had secret meetings with President FW de Klerk and then five years later took power himself, and ending at the scene of his triumphant address to the world on the balcony of the Cape Town City Hall

The tour costs between £78 per head for a group of six and £300 for a one-on-one tour, and includes all transfers, lunch and Robben Island fees.

Africa Travel (africatravel.co.uk; 020 7843 3500) offers a two-centre “Mandela Legacy Tour” from £2,095 per person, to include two nights at the Saxon Hotel in Johannesburg, where Mandela stayed in 1990 after his release from prison, two nights at the Mount Nelson Hotel in Cape Town, a full tour of Soweto, a Footsteps to Freedom Cape Town tour, return flight with British Airways and all transfers.