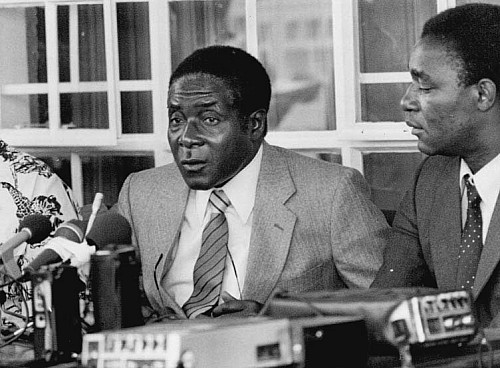 If this is finally the end of Robert Mugabe's 37-year rule of Zimbabwe it will not have come a moment too soon for his beleaguered citizens. For although the 93-year-old dictator is occasionally celebrated on the international stage a liberator and post-colonial freedom fighter the majority of his own people see him as a venal, incompetent tyrant who has transformed the country from the breadbasket of southern Africa to a basket case.

When he came to power in 1980 life expectancy in the emergent Zimbabwe - it had been called Rhodesia during colonial rule - was 60.5 years. Having been ravaged by an Aids pandemic, malnutrition, the spread of other communicable disease such as cholera and tuberculosis and the collapse of the health care system, life expectancy dropped to 37 years in 2006, the lowest in the world. Mugabe himself takes his personal health maintenance abroad, mainly to Singapore and Malaysia.

The economic sectors - manufacturing, mining and agriculture - that were once the engine room of a productive and innovative small economy have for years been grinding slowly to a halt. The second city Bulawayo, once the hub of the nation's industrial output, lies still and silent, the Detroit of the Zimbabwean lowveldt. At independence, manufacturing contributed 27 per cent of the country's GDP and employed more than one and a half million people. Over the last few years more than 100 businesses in Bulawayo closed their doors and, of those surviving, 60 per cent have been placed under judicial management.

However, Mugabe's single most destructive act was the wilful annihilation of the agricultural industry. In early 2000 he turned his militant gangs, who he claimed were liberation war veterans hungry for land, on a white farming community whose reputation for productivity was the best in Africa.

His motive was naked revenge on white farmers who had supported an opposition political party, the Movement for Democratic Change, that would have won that election had Mugabe's political machine not rigged it.

At that time there were 5,000 white farmers, the country produced more than two million tons of maize - a surplus of 300,000 tons - and more than 240 million kilograms of high-grade tobacco. There were also prosperous dairy and beef industries that satisfied local demand and earned precious foreign exchange. Zimbabwe was indeed the breadbasket of southern Africa.

Today there are fewer than 350 white farmers left working the land and, although some legitimate black farmers have replaced the whites, many of the most productive farms have been handed to Zanu PF politicians and cronies - pliable judges, retired generals, provincial administrators, girlfriends of ministers - who have become known as weekend farmers. The country that once fed Sub-Saharan Africa is now dependent on food aid to keep its population alive.

And the sorry tale goes on and on. The country's economic desperation is there for everyone to see on the streets of the major cities. The roads are potholed, the lifts in most government buildings are either out of order or barely working, traffic lights at major intersections operate sporadically, there are constant power outages as the Zimbabwe Electricity Supply Authority (Zesa) struggles to keep up with demand.

The pavements of the capital are crowded with vendors selling every type of goods imaginable, and now they have spilled onto the city's streets in numbers that grow every week. These are not poor uneducated people from the rural areas - these are former teachers, office administrators, car mechanics, skilled factory workers, all victims of a collapsed formal economy, all claiming this is the only way they can pay for their children's education and put food on the family table. The African Development Bank estimates that at least two-thirds of working Zimbabweans are now engaged in the informal economy. (Out of a population of 13 million there are only 600,000 in formal employment, of whom 250,000 are civil servants.)

For all that Robert Mugabe has held public positions both in the African community and, briefly at least, within the body of the United Nations. He has been head of the African Union and chairman of SADC (Southern African Development Community), and earlier this year the World Health Organisation appointed him a "goodwill ambassador", before international outrage forced the UN body to hastily rescind the appointment.

And now, it seems, he has finally gone, driven from power by his own hubris and sense of invincibility. His final folly was to usurp his vice president Emmerson Mnangagwa in an attempt to position his wife, the much-hated Grace, as his successor. Mnangagwa, who is as complicit in the downfall of Zimbabwe as Mugabe, has fled to China but has the support of the military and may well yet end up as the country's next president. So the drama is yet to be fully played out.

However, as Senator David Coltart, a stalwart opposition member of parliament and much-admired former education minister, told me today "Mugabe has truly been hoist by his own petard - he has used and relied on the military to keep him in power for 37 years and assumed they would back him to the end of his days. He has been proved wrong. By trying to create a Mugabe dynasty he went a step too far."

Most of Zimbabweans across the world hope he is right.