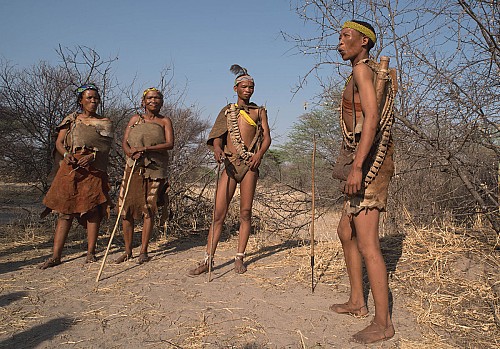 Tripping along so lightly on the Earth`s surface, clicking away quietly in their Naro dialect, their bristling bodies seem connected to the planet in a way that we Europeans are certainly not.

Suddenly, their leader stops. His name resembles Thomas phonetically, but with several clicks punctuating the syllables. He bends down and digs furiously in the soft Kalahari Desert sand. Then he pulls out a scorpion.

This small group of San do weekly walks with Meno A Kwena`s guests, and although there is a Disneyish theme-park aspect to these "bushman walks", they do reveal impressive aspects of their skills, their culture and their remarkable harmony with the planet`s flora and fauna.

At a time when we are finally comprehending fully the damage that post-industrial Homo sapiens is doing to the ecosystems of our fragile planet, these disappearing people are able to demonstrate an alternative way. It`s an object lesson in treading lightly that, sadly, 21st-century man is unlikely to follow.

Meno A Kwena (Teeth of the Crocodile in local dialect) is one of 22 camps in a new collection called Natural Selection. The group is already being called Little Wilderness, a sly reference to the publicly quoted luxury safari company that dominates the market in Africa.

What he means is that, wherever possible, Natural Selection lease fees will be paid directly to local communities through their various structures, thereby making sure that "in the community`s eyes, there is a direct correlation between wildlife and benefits", Bell explains.

Most Natural Selection properties will adopt this model, but there will be a few exceptions. At Meno A Kwena, for example, lease fees are paid to a Land Board. In such cases, benefits will instead take the form of employment and other tourism-related remunerations.

"Over the next three to five years," Bell adds, "we`ve committed to selling shares in the overall company or in individual lodges to neighbouring community structures or citizen-owned pension funds, in order to get local people to be shareholders. It gives them a sense of belonging."

Natural Selection`s invention comes at a time when prices for high-end safaris, particularly in Botswana, have gone through the roof and can be as high as $2,500 (£1,998) per person per night. That is the peak-season price at the country`s two most luxurious camps, Wilderness`s Mombo and Zarafa, operated by Great Plains Conservation (also founded by Colin Bell).

Several others ` Abu Camp, Duba Plains, Kings Pool, Kwetsani ` are close to that, and a raft of others charge between $1,200 and $1,500 per person per night. Even Wall Streeters and London City brokers are beginning to wince at the prices, and Botswana`s premier camps are becoming the exclusive habitat of the super-rich.

Natural Selection properties are coming on to the market considerably cheaper and, as marketing director Pete Allison says, "with a lower thread count on the sheets" than their rivals. The idea of fine Italian cotton as bedware, French champagne at the end of a game drive, and haute cuisine as a matter of course is anathema to old Africa hands. However, their preference for bucket showers and long-drop loos has long been replaced by solar-powered hot and cold running showers and flush toilets, and how you deliver it is a matter of price.

Natural Selection is aiming to run a group of 22 camps by 2018: four in South Africa, four in Namibia and 14 in Botswana. According to Bell, the company`s Classic lodges will cost $995, compared with Wilderness`s $1,500, while its Premier lodges will cost $1,400 compared with $2,500 with Wilderness. Bell admits that his camps won`t have the luxury bells and whistles of his rivals, but maintains that the wildlife will be as good because they are in ecologically important areas.

Meno A Kwena is a good example. It`s a three to four-star camp, set on the stunning bend on the Boteti River, the location of the second-largest zebra migration on the continent and thus the home to a large lion pride as well as elephants, giraffe, kudu, warthog and hippo. The camp`s owner is Hennie Rawlinson, one of the so-called "old buffaloes" that Colin Bell and his colleagues have lured into the new project.

The idea here is to link Meno A Kwena to another group of four camps in the Natural Selection portfolio, Ralph Bousfield`s famous Jack`s Camp collection, on the eastern side of the Makgadikgadi National Park. It`s a first for the Makgadikgadi area, as transfers would either be game drives across the park or, for those with less patience, via helicopter transfers. The ideal scenario is to drive across the park and spend a night fly-camping under the stars.

After two days at Meno, it is time to explore another of Natural Selection`s cluster of camps, this time almost 125 miles north-west of Makgadikgadi. The Khwai conservancy sits in between two of Botswana`s major wildlife areas, Moremi Game Reserve and Chobe National Park, and at more than 200,00 hectares is larger than Kenya`s Maasai Mara and four times larger than Kruger`s Sabi Sands.

I was told by a rival safari operator before arriving that there was virtually no game in this area. So, when Natural Selection`s partner in Khwai, a former hunter named Greg Butler, picks me up at the airstrip, my first question is: "Are we likely to see any game?"

Within half an hour the question is answered emphatically. As we leave the airstrip, a large, tuskless female elephant detaches herself from the browsing breeding herd and chases us along the dirt road. We manage to keep a safe distance from her, but she doesn`t give up, rumbling along, shaking her head and trumpeting.

Eventually, we pull onto open grassland that runs alongside the Mananchira River, the elephant out of sight, and before us are wild animals everywhere. Elephant, lechwe, giraffe, waterbuck, buffalo and, lurking in the still waters, a massive pod of hippos.

Butler explains that there had been a problem with the local community being involved in a substantial commercial fishing business in both the Khwai and the Mananchira rivers "and there were fishermen wandering around all over the place and that kept the game away".

Butler immediately started negotiating with the community, promising direct benefits from tourism, and "we managed to persuade them to shut down the commercial fishing ventures. That was three months ago and game is coming back in numbers. As you can see."

As we drive towards our camp for the night, Butler explains how the Natural Selection programme over the next 12 months will transform the 250,000-hectare conservancy. He says all four existing camps will be refurbished and a new "premier" camp called Tuludi in the south of the conservancy is being built.

"We`re putting a lot of money in, but the first million pula [$82,000] will go into the concession ` vehicles, roads, the community."

Butler, who was once chairman of the Professional Hunters Association, no longer shoots game and describes himself as "something akin to a reformed smoker. I think hunting has had its day."

After a two-hour game drive we arrive at our camp as the sun is beginning to set. This is one of the conservancy`s major attractions: Khwai Star Beds, three raised platforms with a large double bed on top of each, so the occupants can sleep under the starry African night with the nocturnal predators going about their business 50ft below. (Tom Silvester, the chief executive of Loisaba Conservancy in northern Kenya, claims that it was his camp that first introduced the concept of Star Beds, but they are now dotted all the way across Africa`s wild lands.)

The staff have set up a campfire and a dinner table a short distance from the camp`s water hole, and as we sit around the fire solving the problems of Africa over large G&Ts, the elephants start coming to the water hole in significant numbers. By the time we move to the dinner table, there are at least 30 elephants.

I climb the wooden stairway and flop down onto my bed under the stars. Hyenas are whooping in the distant mopane forest and the resident territorial male lion roars nearby as the large, silent, ghostly figures of elephants pass to and from the water hole.

Above, the night sky shines bright with stars, as bright as I have ever seen them. I cannot think of a better place to be.

The Ultimate Travel Company (020 3051 8098) organises safaris to both Makgadikgadi and the Khwai conservancy.

Three nights at Meno A Kwena and three nights at Jack`s Camp in the Makgadikgadi Pans costs from £5,840 per person full-board, based on two sharing. The price includes return British Airways flights from London to Johannesburg, South African Airlink flights to Maun, plus all light aircraft and road transfers.

Five nights at Hyena Pans in the Khwai Community Concession costs from £3,450 per person full-board, based on two sharing. The price includes return British Airways flights from London to Johannesburg, South African Airlink flights to Maun, one night in the Star Beds, light aircraft transfers, and all activities.

For more information about Natural Selection, visit their website.