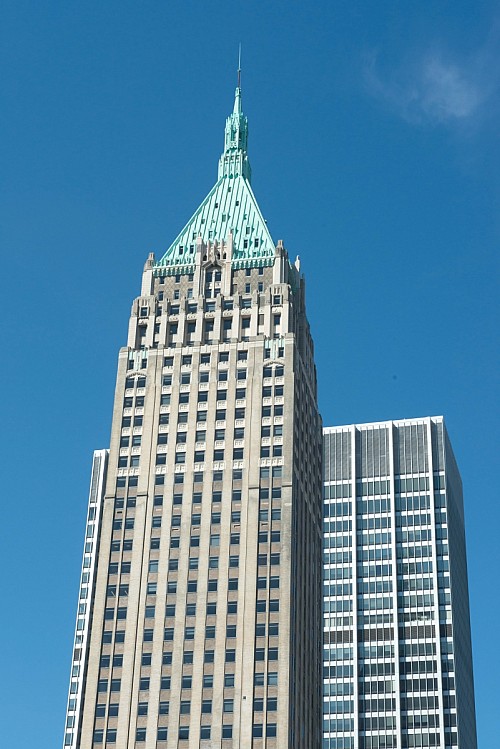 When all of this is over - and we must assume there will be a recognisable post-Covid world - New York will in all likelihood be the city most profoundly changed by the 2020 pandemic.

I have just returned from a four-week trip and the city I have just visited bears little resemblance to the one I lived in through the 1990s. The first thing you notice of course is that the international flights are empty. I flew on a 290-seat British Airways Boeing 777 and there were around eight passengers in business class, around 10 in premium economy and no more than 30 in economy. So, the aircraft was just a little over 16 per cent full.

I should also mention I bought a business class ticket as I thought the spacing inflight and the access to the lounges at Heathrow and JFK would help isolate me from any stray Covid-carrier. (More of this later.) In April, Covid raged through New York and in all more than 24,000 people died. The sound of ambulance sirens was a constant and field hospital tents were set up in Central Park. Since then the city and the State have regained control of the situation and mask wearing, I was cautioned, was strictly enforced everywhere, even in the now hospital-bed-free Central Park.

I was also warned by New York friends before I left London that the authorities there were taking the two-week self-isolation rule very seriously and if you were caught out of lockdown you may well face a $10,000 fine. I was thus anticipating two weeks of take-ins and terrible television whereas my usual introduction to New York would have been an intense round of socialising in the city's restaurants, jazz clubs, bars and cocktail lounges.

However, the threat of close monitoring by the Corona police evaporated at JFK. After landing, there was nobody to collect the Travel Health Declaration I had carefully filled in on the flight. The authorities had no idea where I would be self-isolating, which suggests levels of incompetence matched only by our own government. What I did was to obediently quarantine myself for six days and then take a Covid test on the seventh, when the negative results sent to my email address by the end of that day would safely liberate me.

I was thus free to explore. Unfortunately, there is not much to explore. The jazz clubs are all closed, as is all Broadway theatre, and, according to restaurateur Hassan Elgarrahy, who is a partner in four top Upper East Side dining establishments, “there used to be 28,000 restaurants in the city and there are now just 9,000.” Most of the shops are open - as they were in the UK before Lockdown II - but there are corona casualties. Most notably when I was there was the announcement that Century 21, the European bargain hunters' favourite discount chain, would soon be closing forever.

The restaurants that have survived are certainly making a fist of it. To lure nervous New Yorkers out of their apartments they have had to create an outdoor dining environment that not only occupies the sidewalks but also takes in adjacent traffic lanes. So, Elgarray's Orsay restaurant, a long-time favourite of posh Upper East Siders which re-opened after lockdown in May, now has 50 of its seats outside, with all tables separated by Perspex screens, 25 on the terrace and just 35 inside (and that's with the doors open.) That's less than half the restaurant's conventional capacity but Elgarray says this coming winter will determine whether or not Orsay will be around in 2021. “It's not in our hands,” he says, “it's in the hands of the legislators and the media and what message they are conveying to the public.

“This has all been weaponised by politicians on both sides, so hopefully after the presidential election we can start focusing on recovery so people feel more comfortable about going out.”

Once I had emerged from self-isolation with my negative Covid test in hand I ate at a number of these Upper East Side restaurants, all of which were fully booked every night. The only downside was if your table was located on one of the main avenues - Madison, Park, Fifth etc - rather than on the quieter cross streets, your conversation was constantly interrupted by the wailing of ambulances and polices vehicles, the low rumble of Mack trucks and the banshee howls of motorcycles accelerating away from traffic lights, all passing by within feet of your candlelit table.

In week three I started heading downtown, to old Greenwich Village haunts. I stopped off at the Strand Bookstore, one of my favourite landmarks and, I would have thought, one of the more vulnerable businesses in the city. I was pleasantly surprised to find queues of New Yorkers, all masked and socially distanced, waiting for the doors to open at 9am on a Saturday morning. Strand was founded in 1927 and has survived the onslaught of social media and Amazon retail initiatives. It famously boasts having 18 miles of books in these labyrinthine rooms and a recent appeal to its Manhattan fanbase led to more than 25,000 orders over a single weekend saving it from going into receivership. The queues on that Saturday morning suggest it may yet survive these dark days.

From Strand it was just a brisk walk to McSorley's Old Ale House on East Seventh Street, the oldest and most famous Irish bar in the city where in the day you would be sipping pints with Brendan Behan, Woody Guthrie, Hunter S Thompson, Pete Hammill and Frank McCourt. Now run and owned by Teresa de la Haba and family, it has survived closure the day before St Patrick's Day and has emerged post-lockdown with enough business - mainly out on the sidewalk rather than inside the sawdust covered bar itself - to keep it ticking along. (It also serves the best hot dogs in Manhattan, by the way.)

Teresa and her artist husband Gregory were cautiously optimistic about the future despite news that Fiddler's Green and the Mermaid Inn, both nearby bars, had just announced they were closing and, as we were talking, the Oyster Bar in Grand Central Station, another New York landmark, announced it was closing its doors. So Chapter 11 is never very far away.

“We're hoping we've been through the worst,” said Teresa, ”and that by Spring 2021 New York will start recovering.”

And so I headed for JFK, hopefully to self-isolate in the business class lounge and fly home in the empty front end of a 777. Unfortunately, BA had decided to close said lounge because “there are not enough customers to justify staffing it”. Having paid a large amount of money for business class isolation I felt thoroughly ripped off by our national carrier and was left feeling that if the large international travel organisations can't protect travellers then a return to normal is a long way off.

Last year, pre Covid, more than 65 million people visited New York and spent an estimated $45 billion. This year the figures have fallen by 93 per cent. Next year?