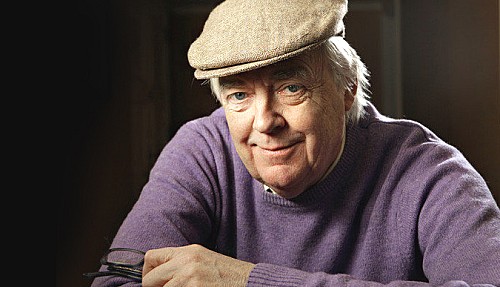 'I hate doing interviews,” says Sir Tim Rice as we sit down in his Barnes home to do an interview. “I get really bored talking about me.” It is a statement that is delivered without side or affectation, merely as a matter of fact, and I have no reason to disbelieve him.
He is submitting himself to this interview partly because he is the patron of the Horizon Dinner for Prostate Cancer and feels it needs some publicity. His father died from prostate cancer, and his friend and former creative collaborator Andrew Lloyd Webber was recently diagnosed with the disease, so it is close to home.
But there is another reason. Within minutes of revealing his discomfort at Piers Morgan-hosted, tear-stained confessionals, Rice is galloping on about his favourite subject – pop music. He then proceeds effortlessly to exercise his encyclopaedic knowledge of the subject, reeling off a list of artists who, as it happens, come from Iowa: “Andy Williams was born there, Bix Beiderbecke came from there, and so, by the way, did John Wayne and Johnny Carson… and of course the heavy metal band Slipknot.”
The reason he is so obsessed with the somewhat obscure and unlikely state of Iowa and the minutiae of its musical offspring is that he is in the throes writing a radio series on America’s states and their musical connections. The series, Tim Rice’s American Pie, which starts tonight on Radio 2, will run for a year. It seems a perfectly appropriate subject for a man who has written the wonderful, essential Guinness Book of Hit Singles and various other Guinness rock and pop compilation books and who was anointed “Rock Brain of the Universe” in 1985.
“I have always been obsessed with America,” he says, “the geography, the history and, of course, the music. I’ve been lucky enough to have travelled through the country a lot, and, in a kind of anorak way, I’ve noted which states I’ve visited and which ones I’ve been to most often, and all that sort of detail. I still haven’t been to all 50 – only 37 so far – but one day I plan to do a massive tour and knock off the remaining ones.”
He says the idea of a journey through America’s musical landscape has been with him for years, although it was “worrying that everyone I took this idea to thought it was a great idea. In the world of musical theatre, if everyone says it’s a good idea, you wonder why nobody has done it before.”
Rice’s approach to American music is that of a quintessential Englishman which, of course, he very much is – anoraky, cricket-loving, articulate, infinitely polite and head over heels in love with American pop.
In his youth, American stars such as Elvis Presley, the Everly Brothers (who he admits have been an obsession since he was 12), Eddie Cochran and Buddy Holly seemed as if they were, he says, from another planet. “They weren’t real people – you couldn’t imagine them sitting down and eating a boiled egg or going to the loo.
“Would you like to hear some of the programme?” he asks enthusiastically, now completely abandoning his reluctance to be interviewed. He returns with a CD, which he puts on. It is the first programme, the subject is Washington state, and Jimi Hendrix’s The Wind Cried Mary explodes from the machine. Our sexagenarian knight/lyricist stands in front of the speakers tapping his foot, lost in the sound, as he probably was when he first heard the song in the summer of 1967.
He says Washington was easy because he could use Hendrix, Bing Crosby, “the doomed king of grunge, Kurt Cobain… and this is Jimmie Rogers”. He sways and taps his foot even more
frenetically to Honeycomb, a 1957 Billboard number-one hit that Rice remembers from his Lancing schooldays. “And that’s followed by Bing Crosby.
“I love the history of popular music. I love to know what people are listening to, even if I don’t like it. I don’t really get turned on greatly by current stuff, but, having said that, I do play Snoop Doggy Dog in the California programme, and I can see why it was popular. It stands up very well.
“I remember, when disco was ubiquitous, I thought, 'Please let the disco era end.’ Now, when I hear a disco record I think, 'Well, that’s rather good.’ In fact, the Bee Gees’ Stayin’ Alive is one of my favourite records of all time.”
The challenges lie in obscure and culturally undeveloped states, such as Delaware and Alaska, but, being the pop brain of the universe, Tim Rice barely pauses. “Well, one of the great pop songs was North to Alaska by Johnny Horton. Then you have Michelle Shocked with a song called Anchorage; a young singer named Jewel grew up in Alaska; and even I have written a song about Alaska [with Francis Lai]. Not that I want to push my own songs on this programme.”
He says that it takes two days a week, choosing the records, researching and writing the script, but, if he hadn’t spent last summer reading up and creating a database of about 7,000 acts that he now has on a spread-sheet “and, of course, if I didn’t have this huge knowledge of popular music in my head”, then it would have been impossible.
“The series is 52 programmes in all – that’s 50 states and one on Washington DC and one on New York City. It’s a hell of a lot of work. I’ve only done four, and I’m already knackered,” he says.
Still, one gets the feeling he could easily be lured into launching himself at a similar series covering British pop music. When I ask if he has been tempted, he looks sceptical, but then he’s off again: “Well, everyone knows who comes from Liverpool, but who knows Bernie Taupin is from Lincolnshire, and the Troggs were from Andover? Could be interesting…”