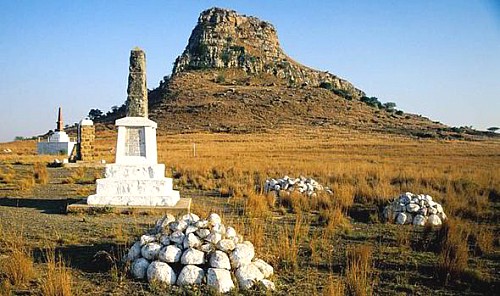 Just over a century ago this was Zululand and this mountainside was the scene of the greatest defeat in British military history.

Today we are going to relive this and the redemptive battle later that day at the famous mission station Rorke’s Drift – setting for the movie Zulu – only six miles from the mountain.

In front of me alongside a small group of fellow British tourists, is Andrew Rattray, son of the famed Zulu war historian David who was murdered in his nearby home in 2007.

Andrew is a chip off the old block, a marvellous storyteller whose knowledge of the colonial wars in this part of Africa is matched only by his fluency in the beautiful, musical Zulu language.

As we look down on the vast expanse of veldt below us, dotted with white cairns that mark the places where more than 1,300 British soldiers and 52 officers fell on the battlefield, we can see what a large theatre of war this was.

It is a boulder-strewn terrain that rises and falls deceptively and in those subtle crevices an army of 20,000 Zulu warriors crept up on the British encampment.

This was one of the great Victorian battle pieces and only 55 soldiers escaped alive.

Earlier that morning we had driven across from the Rattrays’ lodge, Fugitives’ Drift, which is set in a 5,000-acre Natural Heritage Site that overlooks Isandlwana and Rorke’s Drift, the mission station that later the same day would become a scene of redemption for Britain’s military.

The spacious cottages at Fugitives’ Drift are set amongst magnificent paperbark thorn trees and Natal figs.

They all have private verandas from which one can look out over the lovely gardens and enjoy the diverse bird life that thrives here.

Dinner is taken in a mess that is festooned with memorabilia from the Anglo-Zulu wars and this seems apposite for the stories that swirl around every visitor who comes here.

It had a profound effect on Prince Charles when he visited with Prince Harry in 1997, soon after Princess Diana’s death.

The drive from Fugitives’ Drift Lodge to Isandlwana had been an eerie experience.

We listened on the vehicle’s CD player to the voice of Andrew’s late father reading extracts from his celebrated Day Of The Dead Moon recordings, which laid out the events leading up to the battle.

The last time I visited Isandlwana it was with David.

In a telling passage the familiar voice quoted a message sent from the Zulu chief Cetshwayo to the British commander Lord Carnarvon.

It read: “Tell the great white queen that if she is intent on sending her red soldiers against me and my country, she must know that my warriors are as numerous as the ants on this earth and they will eat those red soldiers up.”

So it came to pass.

On the open veldt beyond the spot where we are sitting, the clusters of cairns provide visual evidence of an army that was overwhelmed by, in the words of the then British High Commissioner Sir Bartle Frere, “a bunch of savages with sticks”.

Andrew, like his father before him, is quick to point out the Zulus were anything but that.

These were brave warriors led by tactically astute generals who, incidentally, had great respect for their British adversaries.

As the battle of Isandlwana was subsiding one wing of the Zulu army was crossing the Buffalo River to the east of the battlefield, from Zululand into colonial Natal, heading for the mission station at Rorke’s Drift.

We, too, head for Rorke’s Drift, arriving in the late afternoon just as the Zulu regiments did on that fateful day.

The sun is beginning to set, washing the landscape with an ochre tint and there is a stillness in the air just as there must have been in the moments before the first attack.

As we wander around the site of the former missionary outpost it is easy to picture the waves of Zulu warriors coming over the brow of the Oskarberg mountain.

The small brick buildings, the Rorke’s Drift Museum and a church, that stand on this quadrangle of earth are not original but are on the same spots as the storeroom and hospital that were central to the siege.

It was in these moments before sunset that those brave men made makeshift battlements as the Zulu army approached.

What followed on January 22, 1879, was a siege like no other – 4,000 Zulus against 139 British soldiers, many of whom were invalided in the mission hospital.

Wave after wave of attack for 11 hours.

The movie Zulu is regarded as an accurate dramatisation of events, except for two things. In the film the attack takes place during the day for obvious movie reasons.

It also portrays one of the heroes, Private Henry Hook, as a trouble-making drunk, whereas the real Hook, who won the Victoria Cross, was a modest, teetotal lay preacher.

The beleaguered redcoats fought off the swarming Zulu hordes with the loss of only 17 soldiers.

Eleven Victoria Crosses were awarded, the most ever received by one regiment in a single military action.

We leave Rorke’s Drift and head back to Fugitives’ Drift lodge for dinner.

The talk will doubtless centre on the heroic deeds of the Victorian age.